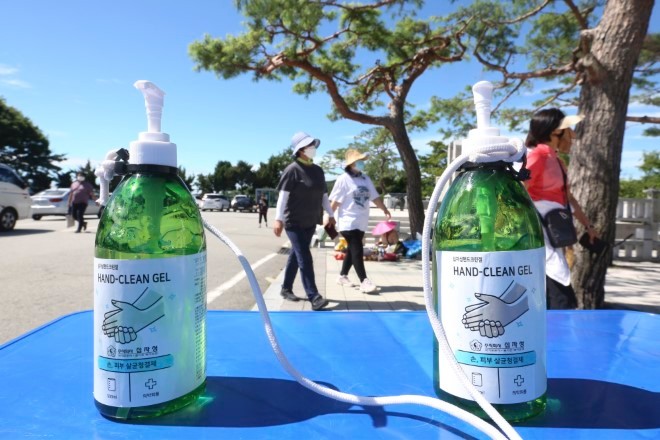 Hand-clean gels are displayed at the Imjingak Pavilion in Paju, near the border with North Korea, on July 26. (AP Photo)

SEOUL--Following the announcement that North Korea is investigating its first possible coronavirus case, authorities reminded foreigners living in Pyongyang to abide by anti-coronavirus measures, the Russian embassy there said on Wednesday.

North Korea’s foreign ministry circulated a notice on Tuesday telling foreigners not to leave the city, hold large meetings, and to wear masks, among other rules, the embassy said in a post on its Facebook page.

North Korea declared a state of emergency and introduced tougher curbs against the coronavirus, state media reported, after it locked down the town of Kaesong, on the border with the South, to tackle what could be its first publicly confirmed infection.

Temperature checks using infrared thermometers, hand-washing facilities and sanitizer dispensers were in place in public locations including shopping malls, restaurants and hotels, the World Health Organization said in a statement.