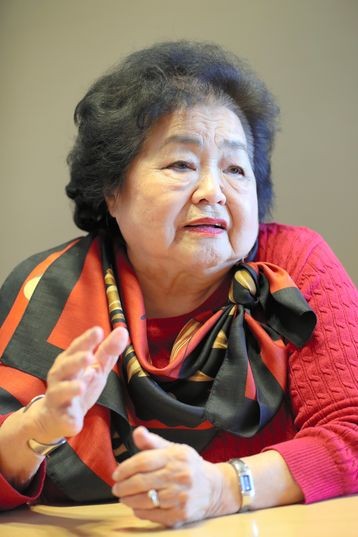 A prominent nuclear bomb survivor and anti-nuclear armament activist is renewing her call for Japan and other countries to sign a U.N. nuclear ban treaty on the 75th anniversary of the atomic bombings.

Setsuko Thurlow, a hibakusha from Hiroshima, sent letters to the leaders of 197 countries asking them to ratify and promote the Treaty on the Prohibition of Nuclear Weapons.
Thurlow, 88, who lives in Canada, wrote to Prime Minister Shinzo Abe as well.

In her letter in English to Abe, she wrote about the resentment and sorrow of hibakusha who hope for the abolishment of nuclear weapons, and shared her personal story about the blast. She was just 13 years old.

“Still to this day, radiation is killing survivors,” she said. “Every person who died had a name. Every person was loved by someone.”

She wrote that she feels personally betrayed as one of the hibakusha because the Japanese government is refusing to sign and ratify the treaty and that it continues to rely on the nuclear umbrella of the United States.

“The fact that the Japanese government shamefully continues to state publicly that nuclear weapons are necessary for its own security undermines all efforts being made for their elimination,” she said in her letter.

“Tragically, the Japanese government seems to be an accomplice to these nuclear-armed nations. This stance represents a dreadful defiance against Japanese public opinion, and has the potential to destroy Japan’s credibility in the international community,” she said.

The Treaty on the Prohibition of Nuclear Weapons marked the third anniversary of its adoption at the United Nations on July 7.

Fiji ratified the treaty on that anniversary, making it the 39th country to officially approve the treaty. Botswana became the 40th on July 15.

The treaty will come into effect 90 days after the 50th country ratifies it.

Thurlow has been promoting the treaty and working with the NGO International Campaign to Abolish Nuclear Weapons (ICAN), which was awarded the Nobel Peace Prize in 2017.

When she was invited for the enthronement ceremony of the new emperor and returned to Japan last year, she hoped to meet with Abe but was unable to do so.

She wrote to world leaders as a representative of ICAN calling for more to ratify the treaty, as Japan is marking 75 years since the atomic bombs were dropped.

“Japan must be aware of its historical, global and moral responsibility, and break with its policy of dependence on nuclear weapons,” she wrote.

“Prime Minister Abe, if you declare, on the 75th anniversaries of the atomic bombings, that you will change Japan’s policy and work towards the signing and ratification of the Treaty on the Prohibition of Nuclear Weapons, this will be etched in the history of Japan and of the world as your greatest legacy.”