EDITORIAL: Government should provide relief to all ‘black rain’ hibakusha 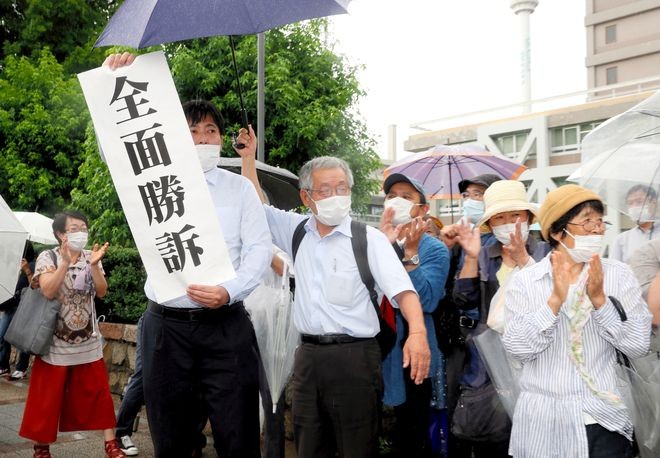 Plaintiff supporters celebrate after hearing the ruling by the Hiroshima District Court in Hiroshima’s Naka Ward on July 29. (The Asahi Shimbun)

A local court has issued a ruling that is a scathing indictment of the government’s policy of limiting a relief program for atomic bomb survivors based on a scientifically questionable zoning of the areas exposed to radioactive "black rain.”

The ruling proposes a new approach that places primary importance on individual atomic bomb survivors’ testimonies about their experiences and their actual health conditions in determining their eligibility for the program.

The program provides health coverage for hibakusha suffering from health problems related to their exposure to the radiation from the nuclear attacks.

Soon after the U.S. bombing of Hiroshima 75 years ago, precipitation, blackened by fallout particles mixed with carbon residue from citywide fires, fell on the city.

The Hiroshima District Court’s ruling on July 29 was a victory for 84 plaintiffs composed of survivors of the bombing who were exposed to the rain containing various irradiated materials and bereft families.

As they are not covered by the relief aid program, they filed a group lawsuit demanding the government provide them health coverage for the ongoing health impacts of the exposure. The ruling recognized all people who were exposed to the rain as hibakusha.

The government has divided the areas where the radioactive rain fell into “heavy rain” and “light rain” zones. Only people who were in the “heavy rain” zones are covered by the program under the atomic bomb victims relief law.

The zoning is based on a survey conducted by a local meteorological engineer immediately after the victims were exposed to the radiation.

The ruling argued that the zoning is nothing but a “rough yardstick” based on limited data collected during the chaotic period following the bombing. It should not be used to limit the parts of the city to be regarded as exposed to radiation.

A later survey estimated that the total area exposed to the radioactive rain was four to six times larger than that of the “heavy rain” and “light rain” zones. Even these findings, the court said, failed to clarify the geographical scope of exposure.

From this point of view, the court examined the testimonies about the black rain of each of the plaintiffs who were in the “light rain” zones or farther and their health conditions. As their testimonies are sufficiently specific and credible, the ruling concluded, victims outside the “heavy rain” zones should also receive aid under the program if they have developed certain health conditions.

The district court ruling, which denied the effectiveness of the simple zoning method, offers an approach to recognizing hibakusha that reflects the realities of the experiences of the victims.

Also notable about the ruling is its recognition of the relevance of the plaintiffs’ claims that they consumed water and crops contaminated by radioactive materials.

During the trial, the government demanded that the plaintiffs provide sophisticated scientific proof that their health conditions were caused by exposure to radiation and denied the effects of internal exposure. The ruling rejected the government’s arguments.

But the prefectural and municipal administrations have been calling on the central administration to expand the areas covered by the aid program according to their own surveys. The ruling has made it clear that the central government should revise its traditional stance toward the issue.

But it has also put pressure on the prefectural and municipal administrations to clearly demonstrate their commitment to supporting the survivors and launch a powerful lobbying campaign to press the central government to avoid appealing the ruling.

Seventy-five years from that summer day, the remaining atomic bomb survivors are all advanced in age. But the full implications of their exposure to the radiation from the bombs have yet to made clear. The trial has brought this grim reality to the fore.

There are also many survivors in Nagasaki who have been mercilessly denied the benefits of the relief program due to the same reason that has caused suffering for the plaintiffs in Hiroshima.

As the only country that has suffered nuclear attacks in war, Japan should become more active in providing relief to victims in line with the unique characteristics of their exposure. The central government has a duty to adopt and implement such a policy under the hibakusha relief law.