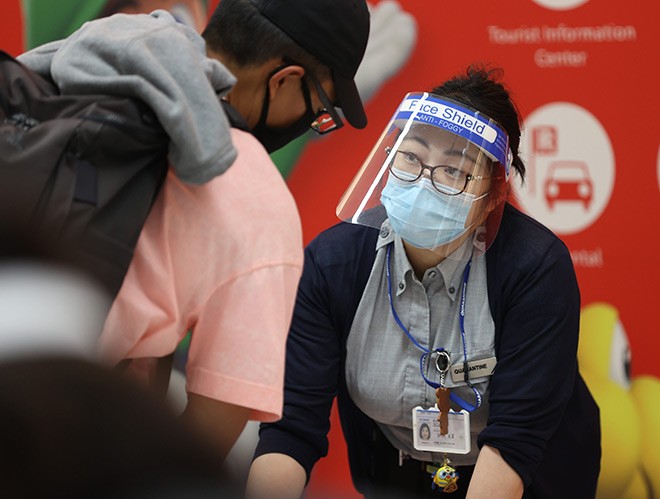 A quarantine official at Tokyo’s Narita Airport explains an arriving passenger how to fill in a questionnaire in June. (Nobuo Fujiwara)

The government will soon allow foreign nationals with residency status in Japan but who are stuck overseas to re-enter the country, the Foreign Ministry said.

Foreign students studying in Japan, company officials and others who left Japan before the government began banning entry to foreign nationals to prevent the coronavirus from spreading can re-enter starting on Aug. 5.

To re-enter the country, they need to obtain a special confirmation letter that confirms they submitted the required documentation. The letter can be issued by Japan’s diplomatic missions in the country or region where they are staying. Missions started accepting applications for the document on July 29.

Those foreign nationals will also be asked to undergo polymerase chain reaction (PCR) tests upon leaving where they are staying and entering Japan, and self-isolate for 14 days after their arrivals.

Starting Aug. 5, other visa holders, such as business managers, technical intern trainees and foreign students, will also be allowed to re-enter Japan. The ministry said up to about 88,000 people will be able to return to the country under the eased restrictions.

On July 29, the ministry also started a procedure to allow people in Thailand and Vietnam who want to stay in Japan on long-term visas to enter the country. The ministry expects resident employees and technical intern trainees to apply for entry. Its diplomatic missions in the two countries will accept applications from those who submit related documents needed for entering Japan.