VOX POPULI: No takers out there for another 80 million Abenomasks 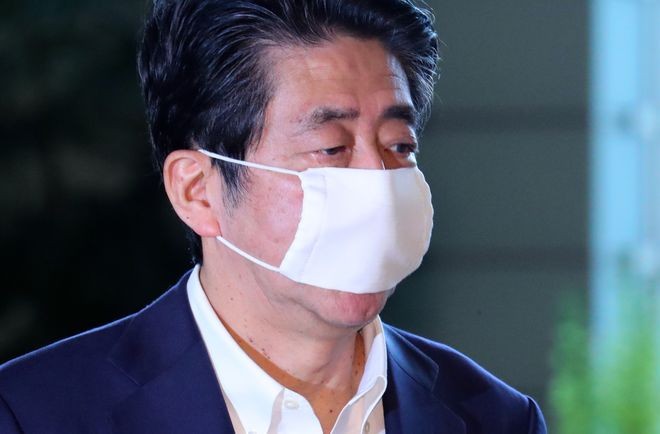 There was a time when these three items were basically all I had to make sure I had with me when going out.

But now, a face mask has been added to the checklist.

Should I become aware of its absence on my way to the train station, I'd definitely hurry back home to fetch it.

Face masks today come in various materials and designs, having evolved quite conspicuously over time.

Back in the Edo Period (1603-1867), a typical face mask was fashioned from a wire frame and a piece of silk fabric, and then given a coating of persimmon tannin.

According to "Masuku to Nihonjin" (Masks and the Japanese) by Mitsutoshi Horii, masks were worn by miners and called "fukumen."

During the Spanish Flu pandemic of the Taisho Era (1912-1926), they were referred to in The Asahi Shimbun's articles as "masuku" in katakana, along with their renditions in kanji that denoted "face cover" and "mouth cover."

A photo of a white cloth face mask from that time--a large one that covered from the nose to the chin--was accompanied by this warning from an expert: "Even if you have coughed only once, stay home."

A total of 130 million cloth masks, distributed recently by the government to households throughout the nation, are much smaller than their Taisho counterparts.

But aside from their inadequate size, their cheesy appearance and untimely delivery have turned most people off.

Not surprisingly, the government just abandoned its plan to send another 80 million masks to various institutions, which was supposed to have started yesterday.

As the plan itself was ill-conceived at best to begin with, this embarrassing outcome was only to be expected.

The mask is a winter keyword in haiku. But from spring and into the "tsuyu" rainy season, there has not been a single mask-free day.

One year ago, I could not even have imagined myself washing my mask in midsummer.

Riding the train to work yesterday, I looked around the car, but not one person was wearing a government-issue mask.

Instead of covering my mouth and nose with a mask, I couldn't help facepalming as I thought of the government's utter tone deafness to what the people really want.

I wonder how this will go down in the history of face masks in Japan.