Worst day yet as Koike again calls on bars, eateries to close earlier 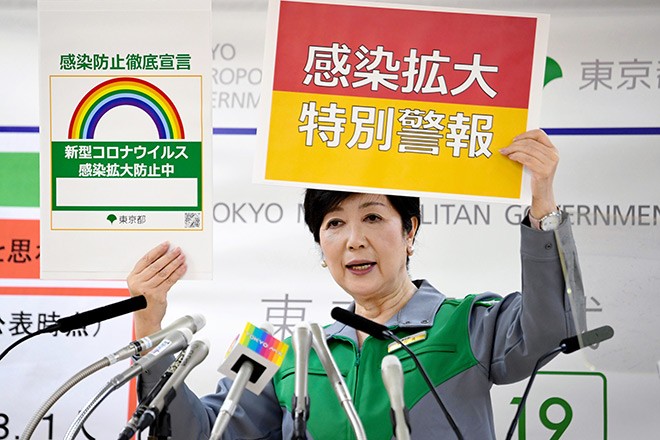 Tokyo also marked a new daily high with 367 cases, prompting Tokyo Governor Yuriko Koike to issue a “special alert” about the spread of infections and call on certain business sectors to cut back on operating hours.

Specifically, Koike said she would request that bars and restaurants, as well as karaoke parlors, close their doors at 10 p.m. between the period from Aug. 3 until Aug. 31.

In explaining her decision not to seek a total shutdown of such businesses, Koike said at a July 30 news conference, “When we consider that this battle with the novel coronavirus will be a protracted one, asking businesses to completely close their doors is not a realistic option.”

She added that small business operators that fully comply with the request from the Tokyo metropolitan government would receive a special allowance of 200,000 yen ($1,900). Koike said she would ask the central government to set aside the money from its reserve fund.

Osaka Prefecture reported 190 new cases, the second highest behind the 221 of the previous day.

Aichi Prefecture, where the city of Nagoya is located, reported 160 new cases, second only to the 167 of the previous day.

Fukuoka Prefecture in western Japan set a record for the second straight day with 121 cases on July 30.

Kanagawa Prefecture matched the record set on April 11 with 76 cases on July 30.

A range of areas were also reporting an increase in the percentage of untraceable infection routes.

An advisory board of experts set up by the Ministry of Health, Labor and Welfare held a meeting on July 30 to analyze recent infection trends.

The members noted that although the increase in new cases primarily centered on urban areas, the pace was much slower than in March and April.

However, the board also expressed concern that the rate of new infections has been accelerating in some areas.

In a separate announcement, shipbuilding company Japan Marine United Corp., headquartered in Yokohama, said 50 employees at its plant in Kumamoto Prefecture had been confirmed infected with COVID-19.