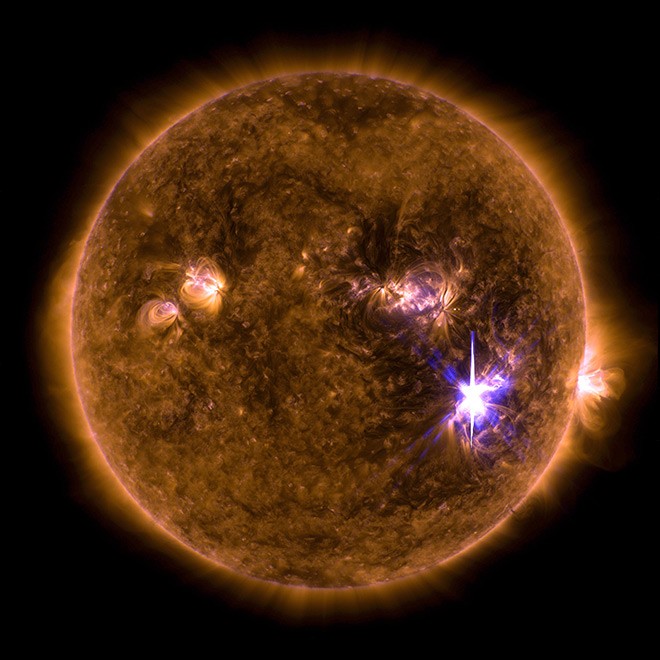 A massive solar flare occurred in September 2017, seen in the lower right of the photo, taken by NASA’s solar observation satellite (Provided by NASA/ GSFC/ SDO)

Japanese researchers have developed a new method for predicting large solar flares, which may lead to better space weather forecasts and prevent disruptions to satellites and communications networks on Earth.

A team of researchers at Nagoya University and the National Astronomical Observatory of Japan published its findings in the journal Science on July 31.

“We want to build a system that allows us to issue an alert a day before a solar flare occurs,” said Kanya Kusano, a member of the team and the director of Nagoya University’s Institute for Space-Earth Environmental Research.

Huge solar flares, which can interfere with the operation of satellites and communications technology, are difficult to predict. One forecast method currently being used can predict solar flares with about 50 percent accuracy. But in tests, this new method predicted seven of nine massive solar flares over the past decade, according to the team.

Solar flares are phenomena where energy accumulated near sunspots on the surface of the sun is suddenly discharged all at once and explodes. The amount of radiation and high-energy particles released by a solar flare can match that of 100 million hydrogen bombs.

A solar flare caused a large-scale blackout in Canada in 1989. Another in 2000 caused the Japanese astronomy satellite Asuka to go out of control.

Researchers have predicted solar flares based on the size and shape of sunspots, but the method largely relies on rule of thumb.

The research team crunched the numbers on magnetic field disruptions near sunspots and on how energy is released, using past observation data of the sun. The team said it improved the forecast method to the point where it can almost precisely predict the condition of magnetic fields on the sun’s surface.

The researchers’ simulation succeeded in predicting massive solar flares that occurred in the past and also when solar flares did not occur at the 198 sunspots where flares never happened.

The abstract of the findings is available at: (https://science.sciencemag.org/cgi/doi/10.1126/science.aaz2511)

New face shield for concert singers nothing to sneeze at