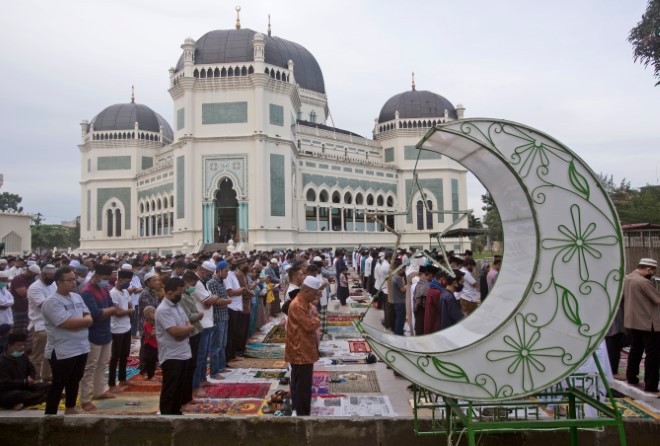 JAKARTA--Indonesian Muslims, wearing face masks and getting temperature checks as a precaution against the novel coronavirus, performed morning prayers on Friday to celebrate the festival of Eid al-Adha in mosques with reduced capacity as well as on the streets.

As the world’s biggest Muslim-majority country struggles to contain the spread of the virus, worshipers were advised to maintain social distancing during the prayers.

Indonesia’s religious ministry also asked mosques to shorten the gatherings this year, while many mosques canceled the traditional ceremony when livestock is slaughtered, and meat distributed to the community.

Instead the donated sheep, goats and cows will be killed in abattoirs to mark the “Feast of the Sacrifice,” celebrated by Muslims around the world to commemorate Prophet Abraham’s willingness to sacrifice his son Ismail at God’s command.

“This year’s Eid al-Adha is very different from the previous years because we need to follow health protocols as we perform prayers, like maintaining social distancing,” said Devita Ilhami, 30, who was at the Sunda Kelapa mosque in Jakarta.

She also noted there were fewer people attending prayers this year and they had to bring their own prayer mats, with markers on the ground to show where they should be laid.

Health experts have been concerned about the risks of the coronavirus being spread during such religious festivals, when Muslims typically gather in mosques and homes, or travel to their hometowns.

An outbreak in the state of Victoria has been partly linked to family gatherings after the holy fasting month of Ramadan.