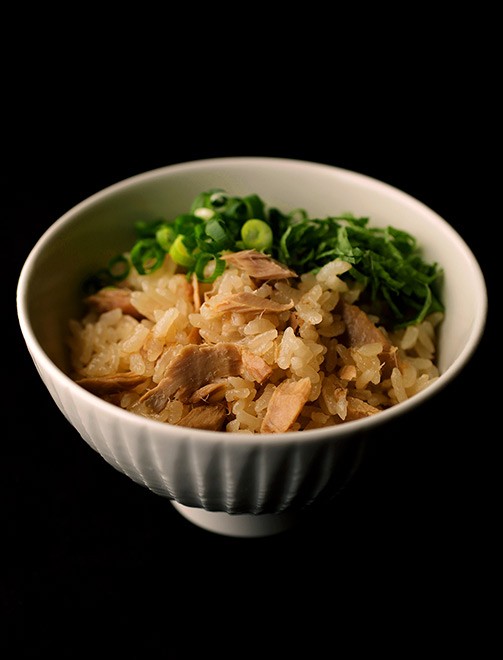 * * *
This tuna dish is the second entry in our series on canned food.

Canned tuna is appreciated as a versatile ingredient as it can be matched with vegetables, used for sandwiches or added to an omelet.

We will be putting it into the rice cooker as "takikomi gohan." "Takikomu" means to cook ingredients with rice.

"Since the flavor and smell of tuna are transferred to the rice when cooked together, the dish turns out tasty without the use of soup stock," said Akiko Watanabe, who oversaw the cooking aspect of the recipe.

According to food manufacturer Inaba Foods, canned tuna is typically classified into three types: canned in oils, where oil accounts for more than half of the seasoned liquid; canned in water with oil, where oil is less than half; and canned in water, where only water or vegetable soup is used.

For this recipe, we chose tuna canned with water, which offers the natural flavor of tuna. But if you are looking for something richer, go with tuna canned in oil.

The dish looks and tastes refreshing with the topping of thin green onion and green shiso leaves. It also tastes good if the condiments are mixed in while the rice is still hot. It is a perfect rice fare for the summer.

Choose the type that suits the menu

The variety of canned tuna lining store shelves differ not only in the ways they are prepared, but also in the shape of the tuna.

We used flaked tuna for this recipe. In the so-called block or solid type of canned tuna, the fish is packed in chunks.

According to Inaba Foods, larger pieces are suited to dishes such as “goya champuru” (Okinawan stir-fry dish with bitter melon) that allow you to enjoy the texture, whereas flaked tuna goes well with dishes that are mixed and eaten, such as egg fares.

You can find canned longfin tuna (albacore), yellowfin tuna, skipjack tuna and bigeye tuna, among other kinds. High-end canned tuna is often longfin tuna, which is characteristically whitish in color.

1. Rinse rice and drain on sieve. When drained, place in rice cooker with 2 cups (400 ml) water and leave for 30 minutes.

2. Open can and drain liquid while holding back tuna with spoon. The liquid will not be used.

3. Finely chop thin green onion. Cut shiso leaves in half lengthwise, stack them up and cut into fine strips. When leaves are dried well before cutting, they will be less likely to stick together.

4. Add soy sauce and sake to rice cooker and mix (PHOTO A). Spread tuna flakes flat on surface (PHOTO B) and switch on.

5. When rice is done, loosen and mix with rice paddle (PHOTO C) and serve in bowl. Top with thin green onion and shiso.

Akiko Watanabe is a cooking expert specializing in Japanese cuisine.
Midori Kasai is a professor at Ochanomizu University and chairwoman of the Japan Society of Cookery Science.

The versatile dip can be enjoyed on bread or with vegetable sticks as seen in the photo.

Open 1 small can of tuna (oil type), drain oil by holding back tuna with spoon. Place in bowl, press down with spoon or other utensils into a paste.

The typical amount of salt in rice cooked with ingredients is between 0.65 and 0.7 percent of the weight of the cooked rice.

Since 2 "go" of cooked rice weighs around 690 grams, the amount of salt in the rice should be approximately 4.8 grams (ingredients not included).

When the rice is seasoned with both salt and soy sauce to get the desired color, for instance, it is easy to think in terms of the ratio as seen in the chart.