Part of a tunnel network under Shuri-jo castle in Naha that was used by the Imperial Japanese Army as a headquarters during the 1945 Battle of Okinawa is shown to media representatives. (Pool) 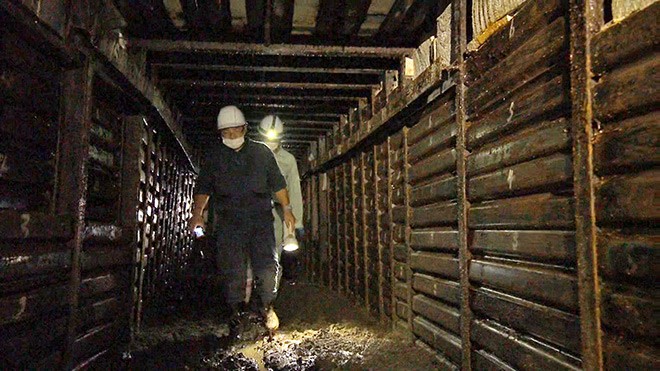 Iron plates were used to reinforce the tunnels under Shuri-jo castle in Naha to prevent cave-ins. (Pool)

NAHA--Part of a tunnel network under Shuri-jo castle here that was used by the Imperial Japanese Army as a headquarters during the ferocious Battle of Okinawa in 1945 recently saw the first light of day in decades.

The site was the headquarters for the 32nd Army, which had overall command of the fighting late in World War II that is thought to have claimed the lives of one in four Okinawans.

The Okinawa prefectural government, which manages the site, restricts entry due to fears of a collapse.

But it opened the tunnels to local media to mark the 75th anniversary of the end of the war.

Japan Broadcasting Corp. (NHK) took video footage of a tunnel on behalf of other media outlets.

The crew entered the site from the fifth tunnel on June 30. The tunnel is reinforced with iron plates throughout to prevent cave-ins. Railroad ties for a tram line and rusted weapons remain where they were left.

The tunnel comes to a dead end about 150 meters from the entrance. The area is packed with mud, apparently the result of a decision by the Imperial Japanese Army to blow it up when withdrawing.

The tunnels constructed between late 1944 and 1945 stretch for about 1 kilometer. It is said that the complex was occupied by 1,000 or so people, including officers, men and student soldiers.

Overwhelmed by U.S. forces, the 32nd Army was almost annihilated in late May. Those who survived decided to withdraw from Shuri to fight a protracted battle in the southern part of the main island of Okinawa, adding to the civilian death toll.