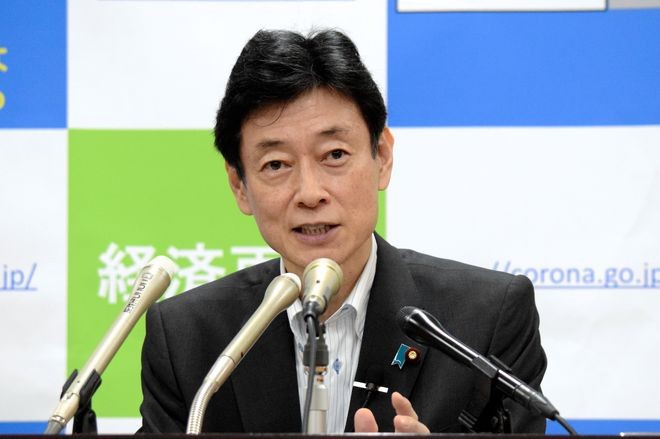 When will the government stop pretending that its completely unrealistic fiscal reform policy target is still achievable by drawing on outrageously optimistic assumptions about the nation’s economy in the coming years?

This is a question that has been raised afresh by the medium- to long-term fiscal projections the government unveiled on July 31.

In response to the devastating damage the new coronavirus pandemic is causing to the economy, the Cabinet Office has sharply revised downward its growth forecast for fiscal 2020. It now predicts that the Japanese economy will contract by 4.5 percent in real terms in the year through March 2021, instead of expanding by 1.4 percent as it previously projected.

Accordingly, the Cabinet Office says the nation’s primary budget balance will be brought into the black only in fiscal 2029, two years later than the year mentioned in its previous projections announced in January.

Prime Minister Shinzo Abe’s administration has been pursuing a fiscal health target of achieving a primary surplus in fiscal 2025. The Cabinet Office’s revised forecasts mean the target will go further out of reach.

But the Abe administration has decided to keep the target unchanged, with Yasutoshi Nishimura, the minister in charge of economic revitalization, claiming the target is “by no means unrealistic.”

The latest fiscal projections do not reflect the effects of the past efforts to cut spending, Nishimura points out. If the government continues making such efforts, he argues, a primary surplus will be attained about three years earlier than predicted.

But this is an extremely irresponsible assertion.

The revised fiscal projections are based on the assumption that Japan’s economy will keep growing at a real annual rate of 2 percent and at a nominal rate of 3 percent in line with the administration’s growth targets.

But Japan’s average real economic growth rate during the seven years since 2013, the year after Abe returned to power in late 2012, was a puny 1.0 percent with a nominal expansion of 1.6 percent, only about half the levels of the administration’s growth targets. This is despite the fact that the period mostly coincided with the nation’s second longest economic expansion in the postwar era.

The Abe administration has maintained that the expected growth will be produced when the effects of its economic policy kicked in. But the coronavirus crisis has made it even harder for the economy to hit the growth targets.

It is now necessary for the government to map out a new fiscal reform strategy based on more realistic growth projections for digging the nation out of a budget hole.

According to an estimate by the Cabinet Office, Japan’s potential growth, or the rate of growth that an economy can sustain without generating excess inflation, is a weak 0.9 percent. If the economy continues expanding at this rate, Japan will have a primary deficit of more than 10 trillion yen ($94.22 billion) in fiscal 2029.

Since the government’s tax revenues will increase only at a pace similar to that of spending growth due to the aging of the population, the primary balance will remain in the red. That means fiscal rehabilitation requires radical tax and spending reforms.

The government’s debt is bound to grow for the time being due to inevitable policy efforts to protect the lives and livelihoods of the people. But the government needs to make it clear as soon as possible how it intends to restore health to public finances, which are now in as bad a shape as they were during World War II, to secure long-term sustainability.

Winston Churchill is believed to have said to the effect that growth covers up all contradictions.

Indeed, economic growth spares political leaders the need to make tough, unpopular policy decisions. But leaders should not base their decisions on the assumption of unrealistic growth because if things do not go as expected, contradictions will only grow further and eventually manifest themselves in a more drastic way.

The government should no longer be allowed to continue avoiding confronting the grim reality of Japan’s serious budget ills.