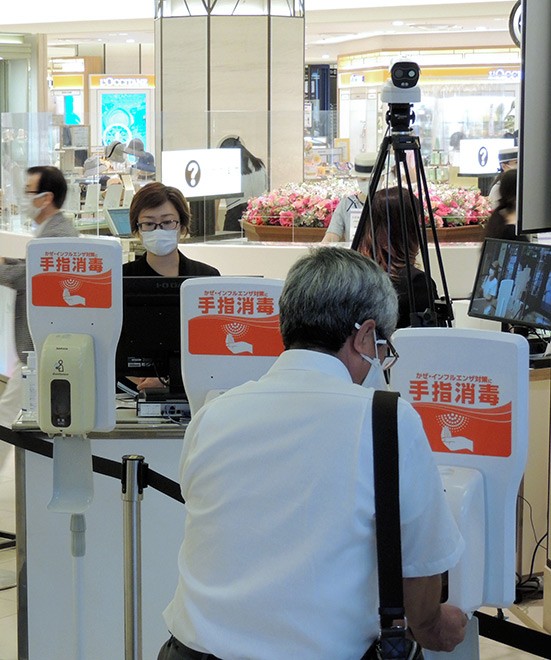 Hankyu Department Umeda Main Store in Osaka has again set up a thermography camera at the entrance. (Daisuke Ikuta)

Businesses in the Kansai region are taking matters into their own hands after waiting fruitlessly for the central government to provide specific guidelines on dealing with the second wave of novel coronavirus infections.

The government has been sending vague and even mixed signals on what the public and businesses should do to combat the spread of the virus.

For example, it has asked people to voluntarily take preventive measures, such as avoiding eating outdoors in groups, but is also promoting domestic tourism.

Hiroyuki Fukano, a co-chairman of the Kansai Association of Corporate Executives, questioned the logic of the government’s anti-virus policy that relies entirely on requests for restraint.

“We still don’t know if the government has a clear strategy for preventing infections,” Fukano said at a news conference in Osaka on July 31.

“During the first infection wave, there was a guideline saying we can reduce the number of infected people if we decrease human contact by 80 percent,” he said. “We would like the government to quantitatively show what and how much we should do now.”

Kansai-based companies had started returning to normal operations after the first wave subsided. But they are now again increasing their teleworking rates and telling employees to refrain from having meals with others outside.

When the state of emergency was in place in April and May, almost every employee at Kubota Corp.’s headquarters in Osaka’s Namba district worked from home.

But in August, the company again restricted the number of people who could come to the workplace, and the teleworking rate reached 70 percent.

“We were able to achieve nearly a 90 percent rate of teleworking at one point, so we will not have any problems doing it again,” a Kubota public relations official said.

Daikin Industries Ltd. in Osaka also asked its employees to work from home in April and May, but it allowed them to return to their offices in June.

However, it started to ask more employees to telework again in July and has reimposed its ban on nonurgent business trips.

Panasonic Corp. asked 70 percent of employees mainly working at its headquarters in Osaka’s Kadoma to work from home from Aug. 3.

Since July 31, Osaka-based Sekisui House Ltd. has increased its teleworking rate from 30 percent to 70 percent at offices in Tokyo, Osaka, Kyoto, Hyogo and five other prefectures.

The housing company also recommends that employees use the virus-tracing app COCOA provided by the government.

“As the infection risk is heightening in homes and workplaces, we will take the same serious levels of measure as those under the state of emergency,” a company public relations official said.

Sharp Corp., headquartered in Sakai, Osaka Prefecture, had allowed only management-level employees to come to the office in their own cars. But from July 28, it let other employees do so to reduce the risk of infection in public transportation.

Osaka-based NTT West Corp., following requests from the Osaka prefectural government, asked its employees not to dine outdoors in groups of five or more people.

Rock Field Co. in Kobe, the operator of the RF1 delicatessen shops, went further in late July by urging employees to completely refrain from eating with others outdoors.