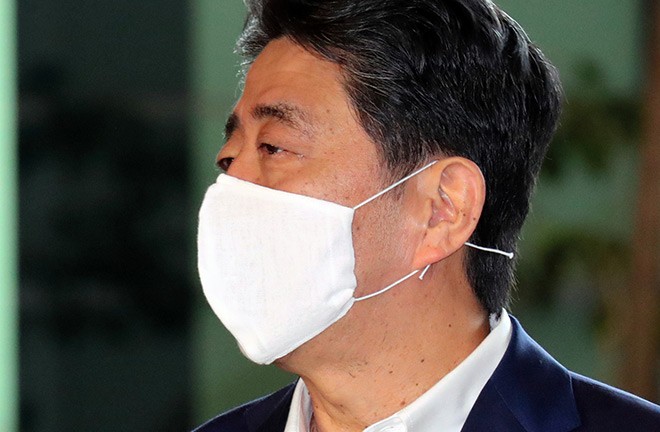 Prime Minister Shinzo Abe explains why he switched to a large cloth mask that covers his nose and chin at the prime minister’s office on Aug. 3. (Takeshi Iwashita)

For four months, a small white cloth was consistently seen clinging to the face of Japan’s prime minister, barely covering his mouth and nostrils.

The mask’s purpose was to prevent Shinzo Abe from catching or possibly spreading the novel coronavirus. But its small size was derided on the internet, and the mask became a symbol of what critics say are his government’s “inefficient” and “meager” measures to contain the contagion.

So Abe’s appearance in public without his usual “Abenomask” on Aug. 1 caused a stir among the public and politicians.

His new choice? A much larger white cloth mask.

Still, his more conventional mask did not end the ridicule on social media.

The attention to Abe’s protective gear continued on Aug. 3, when he arrived at the prime minister’s office wearing another white cloth mask that covered his nose and chin.

Asked by reporters why he suddenly gave up on a type of mask that he tried to push on every household in Japan, Abe said, “Because now I can get different masks at a shop.”

He also noted: “But this one, too, is a cloth mask. I want the public to wear a mask when going out and to cooperate with infection prevention measures.”

Abe’s aide, meanwhile, was seen wearing one of the small cloth masks.

When the novel coronavirus was spreading around the nation in April, Abe announced a plan to deliver two of the small, washable cloth masks to each household as a coronavirus countermeasure and to help alleviate the severe mask shortage.

But the cost of the mask-distribution program--46.6 billion yen ($424 million)--was no laughing matter.

Opposition lawmakers blasted the plan as a waste of public money and a misdirected form of relief in the pandemic.

Some of the masks turned out to be defective or contaminated and were returned. Many arrived at households long after stores had regained sufficient supplies of masks.

Unwanted Abenomasks were donated to care facilities and even foreign countries.

Abe, however, continued to wear the small masks throughout the criticism and laughter.

Akira Koike of the Japanese Communist Party was not convinced by Abe’s reasoning for his change of heart.

“Different masks have been available at stores for quite some time,” Koike said at a news conference on Aug. 3.

He also urged the prime minister to “stop being so wrongheaded.”

“It’s time for Abe to accept that the policy of distributing cloth masks was a mistake. He should own up to it,” Koike said.

Even people close to Abe could not refrain from mocking the “break-up” between Abe and his mask.

“Abe has used (the mask) for a long time, so he doesn’t need to get hung up on wearing it,” an official of the prime minister’s office said. “And anyway you look at it, it didn’t look good on him.”