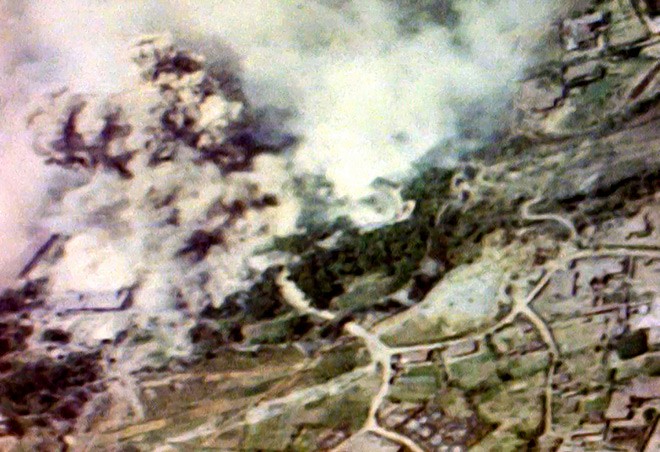 The area around Shuri-jo castle in Naha is engulfed in smoke from U.S. air raids during the 1945 Battle of Okinawa. (Provided by Toyo No Kuni Usa-shi Juku)

A citizens research group on Aug. 2 released footage of the U.S. aerial attack on Shuri-jo castle in Naha during the 1945 Battle of Okinawa that shows the scale of destruction of the historic landmark.

The 36-second color footage shot on April 18, 1945, was obtained from the U.S. National Archives and Records Administration by Toyo No Kuni Usa-shi Juku, a citizens group based in Usa, Oita Prefecture.

Since 2011, the group has sought to acquire film footage taken by the U.S. military and kept at the U.S. national archives and other organizations as part of its efforts to research the level of destruction caused by U.S. air raids around the country during World War II.

The footage, which the group said was taken with a handheld camera by a crew member aboard the bomber, shows 26 U.S. fighter jets, including a bomber of the USS Hornet aircraft carrier, on a raid over the Shuri district of Naha and smoke billowing from the Seiden main hall of the castle and a nearby school.

At the time of the attack, the Imperial Japanese Army was holed up in a tunnel network under the castle that served as its headquarters.

There are no records that show when the main hall burned down.

Statements by survivors are divided over the timing of the destruction, April 1945 or May, when the U.S. military pounded the area with naval gunfire, according to the Okinawa prefectural government and Shuri-jo Castle Park’s management office.

“It’s unthinkable that the structure could remain intact, given the amount of smoke,” said Soei Hirata, 71, who heads the group. “(The April air raids) almost certainly caused extensive damage (to the main hall).”