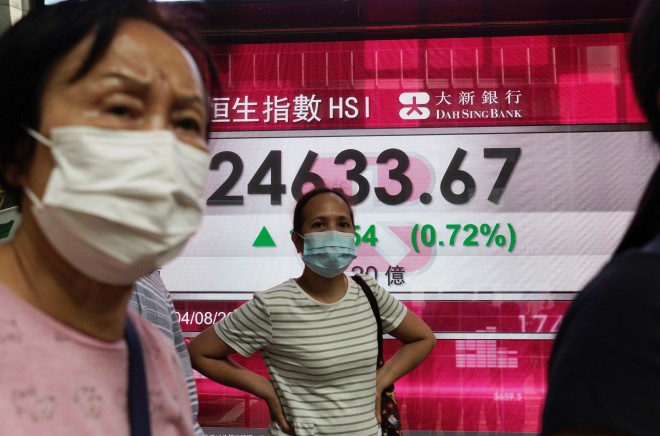 Shares advanced across Asia on Tuesday after Wall Street closed broadly higher on encouraging economic reports, starting off August by closing within 3% of the record high it set in February.

Investors appear to be shrugging off surging coronavirus caseloads in dozens of countries. According to the World Health Organization's tally, there were nearly 18 million confirmed coronavirus cases as of Tuesday, up from 10.2 million at the beginning of July, as outbreaks expanded or revived in many regions.

Such tallies are thought to vastly understate the number of actual cases due to limits of testing and other issues.

Big Tech led the way higher again, and Microsoft and Apple alone accounted for most of the S&P 500′s gain.

The rally followed reports showing that manufacturing has improved across much of the world, including in China, Europe and the United States. With the total U.S. caseload rising by less than 50,000 for two straight days, investors bet that U.S. outbreaks might be moderating, said Jeffrey Halley of Oanda.

“Hopes rose that the U.S. might avoid a deeper recession, which was all financial markets needed to send equity markets higher, and for the U.S. dollar to continue recovering some of its recent losses," Halley said in a commentary.

Microsoft jumped 5.6% Monday after it confirmed that it’s in talks to buy the U.S. arm of TikTok, a Chinese-owned video app that is very popular but has also drawn the White House’s scrutiny. Microsoft said its CEO, Satya Nadella, has discussed the issue with President Donald Trump, and the tech giant expects the talks with TikTok to end no later than Sept. 15, either with a deal or without.

In Washington, slow, grinding negotiations on another huge relief effort for the U.S. economy continue, with both the Trump administration negotiating team and top Capitol Hill Democrats reporting progress over the weekend.

The discussions have gained urgency now that $600 in weekly benefits from the federal government for laid-off workers have expired, just as the number of layoffs ticks up amid a resurgence of coronavirus counts and business restrictions.

The continued spread of the coronavirus is raising worries that the economy could backslide again and snuff out the budding improvements it's shown.

Through the pandemic, though, Big Tech has remained almost immune to such concerns on expectations that it can continue to grow.

Apart from the “wall of money" buttressing markets thanks to massive monetary stimulus and government spending, it seems that “investors are already inoculated from the virus while camping under the tech umbrella," Stephen Innes of AxiCorp. said in a commentary.

Corporate profits have exceeded analysts' expectations across the markets. Roughly two-thirds of the way into earnings season, 84% of S&P 500 companies have reported stronger results than expected, according to FactSet.