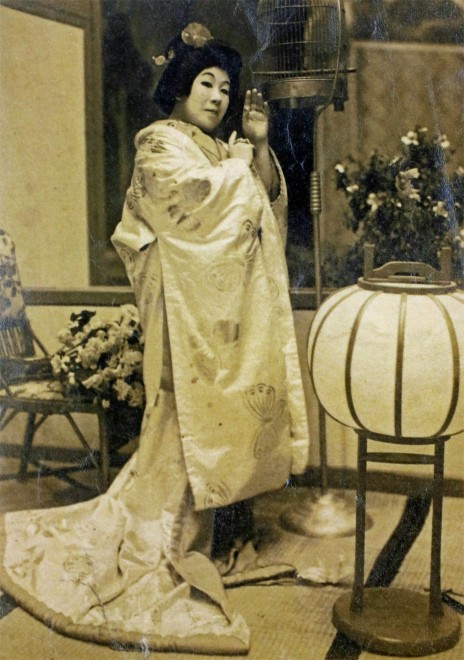 Tamaki Miura is dressed as Cio-Cio-San to play the title role in "Madame Butterfly" for the first time for the London Opera House production in 1915. (Provided by the Yamanakako village education board)

YAMANAKAKO, Yamanashi Prefecture--Tamaki Miura, Japan's first opera star, performed for the emperor, was praised by Giacomo Puccini and traveled the world through turbulent times as a performing artist.

Seventy-four years after her death in 1946 at the age of 62, interest in the prima donna is piquing again.

A special exhibition dedicated to her is being held at the Tokutomi Soho Memorial Museum within the Yamanakako Forest Park of Literature in the Hirano district through Sept. 30.

Miura performed all over the world, from the Taisho Era (1912-1926) to the postwar period.

"She played an active role in a time when women had few opportunities to participate in society,” said Shinsaku Nomura, 34, a curator at the Yamanakako Forest Park of Literature. “I think that was all the more reason for her to visit places to entertain workers and locals across the country during wartime with her tenderness from a global perspective.”

The Yamanakako village board of education created the exhibition in an attempt to tap into her newfound popularity, which arose after a character inspired by the singer was featured in Japan Broadcasting Corp. (NHK)'s morning drama series "Yell."

Because Miura evacuated to the village of Nakano, now called Yamanakako, just before World War II ended, about 850 photos showing her career highlights had been kept at a local "minshuku" guest house where she stayed.

Many of the images are commemorative photos taken during her performances in the United States and Italy. They also include portraits of Miura and other stars from the period.

The guest house, Mikuniso, donated the photos to the village office seven years ago. Of them, 70 photos are on display for the first time.

The images are arranged to introduce her musical career in chronological order. A piano brought into the village by Miura, her kimono, letters and other personal items are also on display at the venue, as well as handwritten manuscripts of Yukio Mishima's novel "Cho-cho" (Butterfly), for which Miura served as a model.

Miura graduated from the Tokyo Music School, now called the Tokyo University of the Arts, before launching her career as an opera singer in her early 20s.

She played main roles in performances held in front of the emperor when members of the British and German royal families came to Japan and received favorable reviews.

According to documents from the exhibition, she made her first overseas trip to Germany in 1914 when she was 30 years old and was accompanied by her second husband, a doctor.

But before long, World War I broke out.

The couple fled to Britain, where Miura was given the chance to perform the protagonist in "Madame Butterfly" for the first time at the London Opera House.

The opera singer spent the next 20 or so years giving stage performances from her base in the United States.

Miura returned to Japan in 1935 at the age of 51. When the Pacific War flared six years later, she traveled around the country to give charity performances.

In addition to opera, she sang songs that were popular at the time to lift people’s spirits.

Miura evacuated to Yamanakako after she turned 60 in 1944, about two years before her death. She did her vocal exercises each morning at the lakeside. Some locals still recall hearing her tonal exercises on the other side of the lake.

Miura played the title role in "Madame Butterfly" for the first time at the London Opera House in 1915. One of the photos shows a scene from her dressing room.

The title is a tragic opera by Italian composer Giacomo Puccini (1858-1924), set in Nagasaki. The protagonist, Cio-Cio-San, a 15-year-old geisha, marries a U.S. naval officer and gives birth to a boy.

However, he is formally married in the United States and takes the boy away. In the end, she commits suicide.

Miura played the role about 2,000 times and received praise from Puccini. The composer even said the Cio-Cio-San he had dreamed of became a reality.