EDITORIAL: Nuclear deterrence has only raised risk of catastrophe 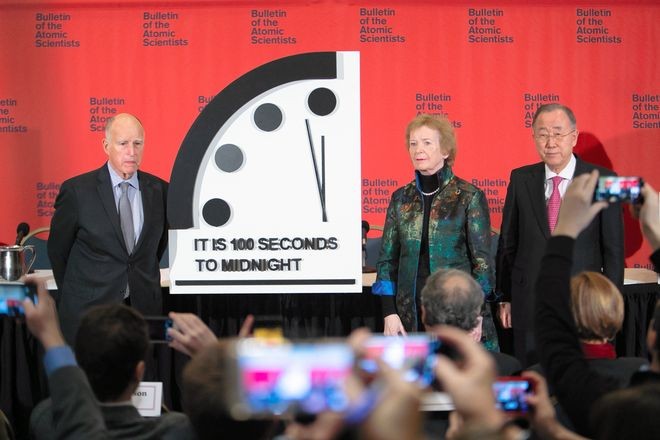 Hiroshima will observe the 75th anniversary of the 1945 atomic bombing of the city on Aug. 6. Detonated by the United States, the bomb and its unprecedented destructiveness marked the beginning of the atomic age.

One symbol that serves as a yardstick of the terror brought by this age is the Doomsday Clock. The Bulletin of the Atomic Scientists sets this clock by using “midnight” as the time for a hypothetical global nuclear catastrophe.

The U.S.-based Bulletin has been announcing the time every January since 1947, two years after the atomic bombings of Hiroshima and Nagasaki.

In January this year, the clock showed “100 seconds to midnight”--the closest ever to the catastrophe.

Amid the growing precariousness of the global structures for nuclear nonproliferation and disarmament, arms expansion is accelerating and increasingly involving cyber and space warfare.

With the United States and China now in their “new Cold War” state, some analysts say an era of a superpower arms race has returned.

Three-quarters of century after the bombings of Hiroshima and Nagasaki, we have even started hearing the expression “nuclear restoration.”

How should the world, including Japan, deal with this reality?

Predicting the exact nature of what constitutes a global threat is extremely difficult to begin with.

In 2020, this fact was driven home more forcefully than ever by the COVID-19 pandemic.

We were all made acutely aware of this invisible menace that crosses national borders and infects indiscriminately. But in the meantime, the Doomsday Clock has kept ticking inexorably, thanks to the existence of an unimaginable number of nuclear weapons.

The novel coronavirus will not immediately dissipate, even if the human race somehow manages to come together and fight it as one.

But the nuclear threat, being of humankind’s own making, can be brought under control if a firm political decision is made to implement risk-reduction measures.

“The survival of our civilization should not depend on our continuing to have good luck,” William J. Perry, the former U.S. defense secretary, warned in his keynote speech delivered online at this year’s International Symposium for Peace held at the Nagasaki Atomic Bomb Museum Hall.

The great majority of nuclear weapons are kept ready for war, creating a touch-and-go situation. This means that even in the absence of any intent to start a nuclear conflict, an accident or miscalculation can trigger it.

The world is effectively mired in a state of constant brushes with catastrophe, and this owes to the concept of nuclear deterrence.

The rationale is that since a nuclear attack will inevitably invite a counter-strike in reprisal, this awareness deters nations from using their nuclear weapons, which in turn keeps the world “safe.”

However, this concept can never escape its essentially self-contradictory nature.

So long as nations remain mistrustful of one another and keep their weapons of mass destruction as a threat, their mutual suspicion will encourage arms stockpiling, which will only raise the risk of a doomsday event.

And once the “balance of terror” is broken, nuclear weapons will not help anyone within their target.

NEED TO FOCUS ON ‘HUMAN SECURITY’

Now is exactly the time to fundamentally re-examine the concept of security based on nuclear deterrence.

Although military capabilities do play a role in dealing with conflicts, there are limits to securing “safety” entirely through military means.

The world needs to see all sorts of risks to human life in their entirety and devise ways for a sustainable distribution of resources.

This calls for a change of course toward realizing “human security” that focuses on the lives and well-being of flesh-and-blood human beings, not on the interests of nations.

Accomplishing these goals requires a framework for multinational cooperation, which is also indispensable to global safety.

But the thinking of nuclear nations is the exact opposite.

The United States, which currently tops the world in damage from COVID-19, accounts for roughly 50 percent of the world’s nuclear armament-related expenditures.

If all that money is used to fight the COVID-19 crisis, it could secure 300,000 ICU beds, 35,000 respirators, 75,000 doctors and 150,000 nurses, according to the International Campaign to Abolish Nuclear Weapons (ICAN), a coalition of nongovernmental organizations.

However, it is not only the nuclear superpowers that are offering inadequate health care services to their citizens. Countries that rushed into nuclear development after the Cold War, such as North Korea, have health care systems that are fraught with problems.

Such inconsistencies need rectifying. And that is just one reason why the United States and Russia, which together account for 90 percent of the global nuclear arsenal, should lead the way in nuclear disarmament.

New START (Strategic Arms Reduction Treaty), which is the last remaining nuclear disarmament treaty binding the United States and Russia, will expire in February next year. The two nations must agree to extend it to prevent unlimited arms expansion.

And as a risk-reduction measure, they should also make their “no-first-use” declaration and ease their alert status.

Creating a disarmament system involving China will eventually become an urgent task, but that cannot even begin unless the United States and Russia start moving in that direction.

The Treaty on the Prohibition of Nuclear Weapons of 2017 reaffirmed the inhumanity of nuclear weapons. And declaring that the weapons should never be used again, the treaty stated that the only way to ensure their non-use is to ban them under international law.

Signatories to this treaty have increased steadily over the years, and the treaty may even take effect before the end of this year. This means that the decades-long determination of Hiroshima and Nagasaki hibakusha (A-bomb survivors) to push for a nuclear-free world has moved international society, and their plea may finally be codified into international law.

But the Japanese government has not signed the treaty, saying the Japan-U.S. Security Treaty puts it under the U.S. “nuclear umbrella” that serves as an extended deterrence.

We must say the Japanese government’s obsession with its myopic concept of security goes against the international current.

Japan proclaims itself as a bridge between nuclear nations and non-nuclear nations. If that is the role Japan really wants to play, then the country must consider signing the nuclear weapons ban treaty and urge nuclear nations to declare “no-first-use” policies and participate in multinational nuclear disarmament talks.

These are precisely the efforts Japan is responsible for making as the world’s only victim of atomic bomb attacks.