Kono tells China SDF will respond to intrusions around Senkakus 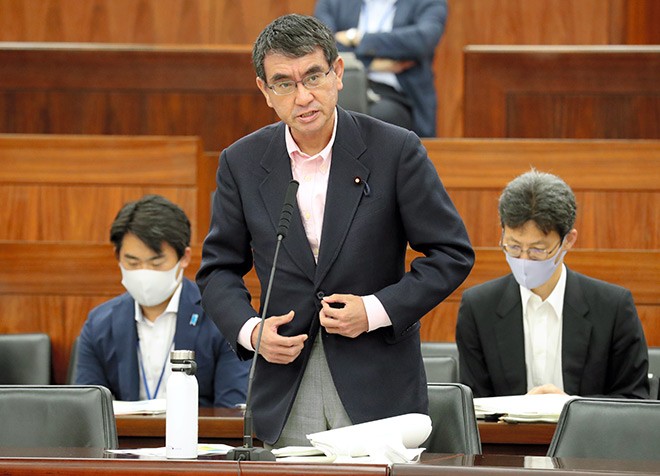 Defense Minister Taro Kono answers questions at the Committee of Foreign Affairs and Defense at the Upper House in July. (Takeshi Iwashita)

Japan put Beijing on notice that its Self-Defense Forces will respond if Chinese government vessels continue to intensify their activities around the disputed Senkaku Islands in the East China Sea.

“The SDF will act firmly when necessary while joining hands with the Japan Coast Guard,” Defense Minister Taro Kono said at an Aug. 4 news conference.

Asked to elaborate on what such action might entail, Kono declined, saying, “We do not want to show our cards.”

Kono said China Coast Guard vessels had drastically expanded their activities around the Senkaku Islands in recent years, adding that the Japan Coast Guard had done a fine job patrolling the area.

But when a case arises that requires a response from the SDF, Kono left no doubt that one would be forthcoming.

A senior Defense Ministry official said Kono’s comment was meant to serve as a warning to China, referring to the expected arrival of Chinese fishing boats this month.

Large numbers of Chinese fishing boats are expected to reach waters close to the islands, which China calls the Diaoyu Islands, around mid-August following the lifting of a suspension period imposed by Chinese authorities.

"The defense minister was talking about the SDF's regular warning and surveillance activity," the official said of Kono's mention of SDF action.

Activity by China Coast Guard vessels in the contiguous zone adjacent to Japanese territorial waters around the islands, which come under Okinawa Prefecture's jurisdiction, set a record of 111 days in a row on Aug. 2.

But the four vessels seen on Aug. 2 were not there the following day as they fled to avoid Typhoon No. 4 that was moving north near the islands, according to Japan Coast Guard officials.

The officials said the Chinese vessels will very likely return to the contiguous zone once the typhoon threat is gone.

The vessels' daily entry in the zone began on April 14.

Until a few years ago, only two or three China Coast Guard vessels entered the area. In more recent years, it is usually four.

The vessels are getting larger in size. Many of them are larger than the mainstay 1,000-ton Japan Coast Guard patrol vessels.

The frequency of their entry into the contiguous zone this year outpaced that of last year, which set the previous record.

By Aug. 2, Japan saw a total of 731 China Coast Guard vessels entering the zone over 205 days.

In May and July, two China Coast Guard vessels chased Japanese fishing boats, which were in Japanese territorial waters.

Such actions, the Japan Coast Guard believes, reflect Beijing’s intention to control the islands by stepping up pressure. The coast guard repeatedly issued warnings for the vessels to leave.

(This article was written by Daizo Teramoto and Shun Niekawa.)