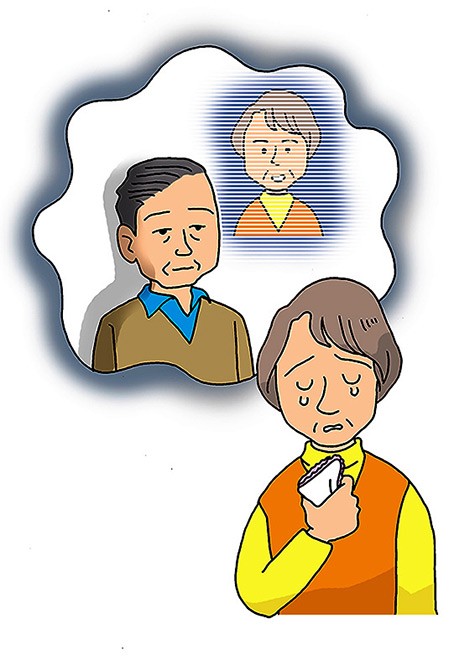 People with dementia in Japan have experienced worsening symptoms during the COVID-19 pandemic. (Illustration by Noriko Fukui)

Dementia patients are experiencing worsened cognitive functions and weakened physical strength from being stuck at home due to restrictions to curb the COVID-19 pandemic.

The Japan Geriatrics Society and Hiroshima University announced the findings on Aug. 4, which were gathered through an online survey of care managers and other health personnel on the pandemic's effects on dementia patients.

“If the pandemic continues long-term, the harmful effects on dementia patients will become more serious,” said Shinya Ishii, a professor of geriatric medicine at Hiroshima University. “We need to promote programs that allow patients to have physical exercise at home or make it easier for them to find operators which provide services for the elderly.”

Measures put in place by the central and local governments to encourage residents to alter their lifestyles to prevent infections revolve around what is known as the “Three Cs”: Avoiding closed spaces, crowded places and close-contact settings, along with wearing face masks.

But how to provide medical and nursing care services to dementia patients is becoming an issue because they have more difficulty adapting to the new social norms.

The survey was conducted via the Japan Association of Geriatric Health Services Facilities and the Japan Care Manager Association between June and July.

A total of 945 medical institutions, including hospitals with wards for dementia patients, special elderly care nursing homes and other facilities, responded to the survey, along with 751 care managers.

Restrictions on, for instance, going out served to worsen symptoms of dementia patients, according to 39 percent of medical and nursing home facilities and 38 percent of care managers, who also said the hardest hit were those who already had advanced symptoms.

Patients in nursing homes exhibited an increased worsened mental state, the survey reported. Some tended to repeat themselves more often, which was attributed to heightened anxiety caused by the restriction on going out and meeting visitors, including family and friends.

More patients also showed a greater decrease in their cognitive functions since staying at home longer due to the pandemic, the survey showed.

Dementia patients living at home have had less time to move their bodies due to a suspension of day care services.

Reduced physical activity has weakened some patients to the point they have trouble with simple actions such as changing clothes, survey responses showed.