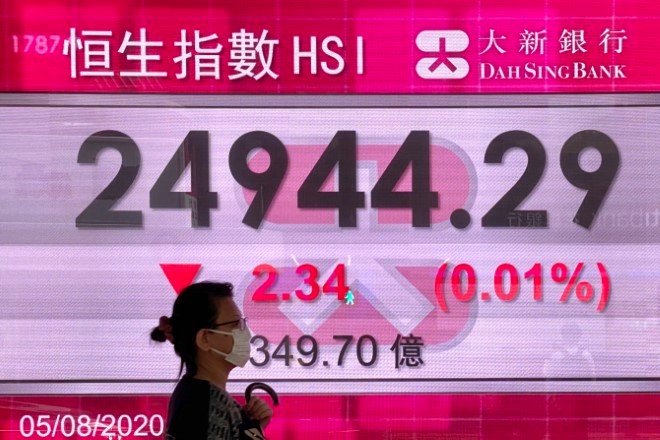 BEIJING--Asian stock markets were mixed Wednesday amid investor concern about U.S. stimulus spending and a trade agreement with Beijing.

Shanghai and Hong Kong advanced while Tokyo and Sydney retreated. Gold, which has set a string of records, rose again after a deadly explosion in Beirut.

Investors are watching the stalemate among U.S. legislators over employment benefits for millions of Americans thrown out of work by the coronavirus pandemic and spending to shore up anemic economic growth.

At the same time, news reports from Washington said Chinese and American trade envoys will meet this month to review their “Phase 1” agreement aimed at ending a tariff war. That follows U.S. President Donald Trump’s threat to discard the agreement over Beijing’s handling of the coronavirus pandemic.

Trading in Asia was lackluster, “with the mood darkening on both the U.S. aid package and geopolitics fronts,” said Jingyi Pan of IG in a report.

India’s Sensex opened up 1 percent at 38,055.80. New Zealand and Bangkok retreated while Singapore and Jakarta gained.

Investors have been buying gold and silver, usually seen as a store of value if stock prices decline. Forecasters see that as an indicator of rising unease about the global economic outlook.

The explosion in Beirut killed at least 70 people, injured more than 3,000 and flattened much of the Lebanese capital’s port. The cause of the most destructive blast in the country’s history was unclear.

Global markets have recovered most of this year’s losses as investors look ahead to the possible development of a coronavirus vaccine. Forecasters warn the rebound might be too big and fast to be sustained by uncertain economic activity as infections rise in the United States and some other countries.

Legislators in Washington have failed to agree on a relief package including a replacement for $600 weekly unemployment benefits that expired last week.

The number of people filing for unemployment is rising after a resurgence of infections pushed some states to reimpose controls on business.

Economists expect a report Friday to show U.S. employers added 1.8 million jobs last month, which would be welcome growth but also a slowdown from June.

For now, investors are relying on the Federal Reserve, which said last week it would keep interest rates near zero. At the same time, Fed Chairman Jerome Powell said Congress needs to take action.

“Markets are betting on the Fed picking up the slack more permanently even from temporary fiscal stimulus lapses and convulsions,” said Hayaki Narita of Mizuho Bank in a report.

In energy markets, benchmark U.S. crude lost 11 cents to $41.59 per barrel in electronic trading on the New York Mercantile Exchange. The contract rose 69 cents on Tuesday to settle at $41.70 per barrel. Brent crude, the basis for pricing international oils, shed 6 cents to $44.37 per barrel in London. It gained 28 cents the previous session to $44.43.