Aquatic beetles climb out frogs’ behind after they were preyed on. (Provided by Shinji Sugiura, associate professor of ecology at Kobe University) 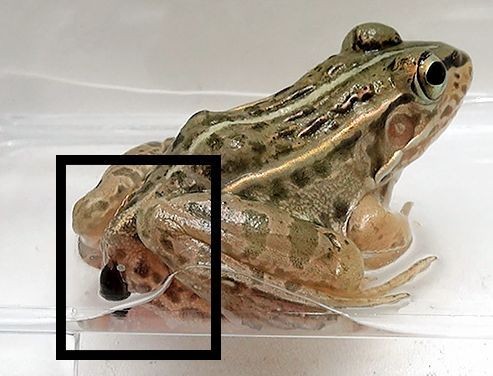 An image showing the escape of an aquatic beetle from a black-spotted pond frog’s buttocks (Provided by Shinji Sugiura, associate professor of ecology at Kobe University)

Chances for survival are usually pretty slim for tiny insects after being swallowed by a frog, but that is not the case for aquatic beetles.

Once eaten, the species is able to negotiate the stomach and intestines to safely emerge from the amphibian’s rectum--surprisingly, still in good shape, according to Shinji Sugiura, an associate professor of ecology at Kobe University.

The survival strategy for the aquatic beetle, which typically are 5 millimeters long, during its trip down the digestive tract, is apparently to use its legs to stimulate the predator’s intestines, hastening the excretion process.

“It is possible that aquatic beetles have developed the ability to survive in an environment where they are easily preyed upon by frogs,” Sugiura said.

It is the first time this strategy has been confirmed among living creatures, according to scientists.

Frogs, lacking teeth, are known to swallow their prey whole.

In an experiment, Sugiura fed a black-spotted pond frog with 15 aquatic beetles. Fourteen of them emerged from the predator’s behind, sufficiently healthy to immediately resume their normal activities.

More than 90 percent of the insects that made it out of the frog’s body lived for more than two weeks.

In the case of the black-spotted pond frog, it usually takes an average of 50 hours to excrete after eating other bugs.

But the aquatic beetles came out an average 1.6 hours after being swallowed.

When the aquatic beetles were given to the frog with their legs fixed with wax so they could not move them, none made it out alive.

They were digested and excreted on average 60 hours later, dead.

Sugiura said he believes the beetles moved their legs inside the frog’s digestive system to stimulate it to defecate, allowing them to escape alive. It is otherwise impossible for the small insects to come out of the frog’s backside because its sphincter will remain closed.

When aquatic beetles were given to four other kinds of frogs, their survival rate was more than 60 percent, according to Sugiura.

Details of his findings are carried by the online edition of the U.S. scientific journal Current Biology.