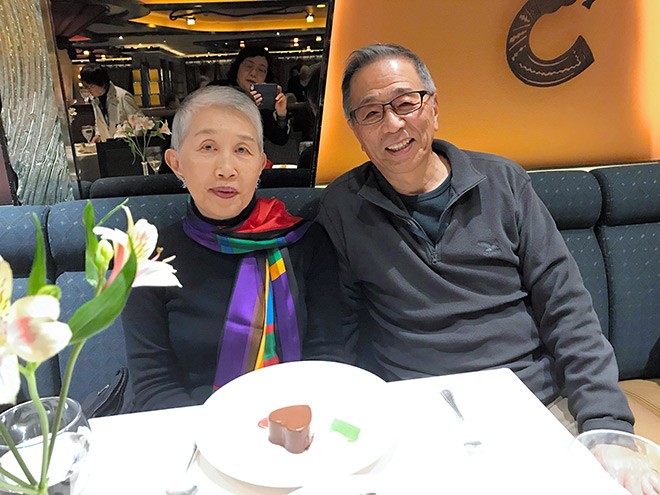 A Kanagawa Prefecture couple celebrate their wedding anniversary aboard the Diamond Princess cruise ship. (Provided by the wife)

The cruise vacation was supposed to have been the perfect way to celebrate a wedding anniversary, but for one 75-year-old resident of Kanagawa Prefecture, the voyage aboard the Diamond Princess turned into her worst nightmare.

In the end, 723 passengers and crew members came down with COVID-19 and 13 of them died, including the woman’s 75-year-old husband.

The woman, who kept detailed notes of the experience, agreed to share it with The Asahi Shimbun.

The first cluster infection aboard the cruise ship was confirmed on Feb. 5. But the passage of six months has not helped the woman gain answers as to why her husband did not survive.

“Every day was like torture because all I could do was watch my husband suffer,” the woman said.

The couple boarded the Diamond Princess at Yokohama Port on Jan. 20.

They had planned a 16-day cruise trip and to celebrate their wedding anniversary at sea.

It was during that period that the first known COVID-19 infection in Japan was confirmed.

“I was only looking forward to having a good time and had no idea of what the novel coronavirus was about,” she said.

There were a total of 3,711 passengers and crew members, leading the woman to observe in hindsight that it was a location that would now be defined as highly dangerous for COVID-19 infections because it was not well ventilated, congested and everybody was in close contact.

On Feb. 1, a passenger who disembarked in Hong Kong was confirmed infected with the virus. Passengers, however, were only told about the infection two days later.

The cruise schedule was altered, and the Diamond Princess anchored at Yokohama Port on the evening of Feb. 3 to begin testing passengers.

The woman’s husband developed a cough and chest pains and was seen at the medical clinic on board.

But regularly scheduled events aboard the cruise ship continued the following day.

On Feb. 5, the health ministry announced that 10 of the 31 people on the cruise ship who underwent polymerase chain reaction (PCR) tests were found to be infected. The government decided to quarantine the cruise ship with all the passengers and crew members aboard for two weeks.

The woman’s husband had diabetes, so his condition gradually worsened as he ran a fever of 38.2 degrees. On Feb. 9, the fever reached 39.6 degrees.

The woman made dozens of phone calls to the ship's medical clinic before finally receiving a response. But she was told all doctors were too busy to see her husband.

On Feb. 10, a doctor finally visited the couple’s room. The doctor knew something was wrong after the husband’s blood oxygen level was checked.

The woman was told to prepare her husband to be taken immediately to a hospital. He was taken from their cabin on a stretcher.

The woman later found that she was also infected with COVID-19, but she was taken to a different hospital from her husband. She was released in late February and immediately went to the hospital where her husband had been admitted.

But he was in an intensive care unit, so she had no direct contact with him. He was also placed on an extracorporeal membrane oxygenation (ECMO) device, which circulates blood through an artificial lung.

The woman could only see her husband’s chin because he was connected to so many tubes.

One day, she asked a nurse wearing protective clothing to pass along a message to her husband.

The nurse helped the husband wipe his eyes with a tissue.

While the woman was upset at not being able to directly say those words to her husband, she felt he got the message.

Late on March 22, the hospital called the woman and told her that her husband had no pulse.

After rushing to the  hospital, she finally saw his face through the glass, the first time she had seen it since leaving the Diamond Princess.

“That was our final farewell,” she said.

He was placed in a body bag and only three relatives were permitted to attend his cremation.

The government’s panel of experts dealing with infectious diseases has said that one reason Japan has fewer infections and fatalities from COVID-19 in comparison with the West is due to the lessons learned from dealing with the infections on the Diamond Princess.

“I feel like we were used as guinea pigs," the woman said. "Why did we have to remain on the ship where infections were spreading?”

She also is highly critical of the way Carnival Japan Inc., the local branch of the cruise ship operating company, handled the matter. A Carnival Japan employee visited her in mid-July, but when she asked about compensation, the response was that the company was exempted of all responsibility because the pandemic was a totally unexpected development.

While she realizes that the government and the cruise ship's operating company could never have envisaged what unfolded, she still believes there was a delay in taking action.

“The results might have been different if my husband had been taken to a hospital earlier,” she said. “I cannot erase the questions of why they failed to do that.”