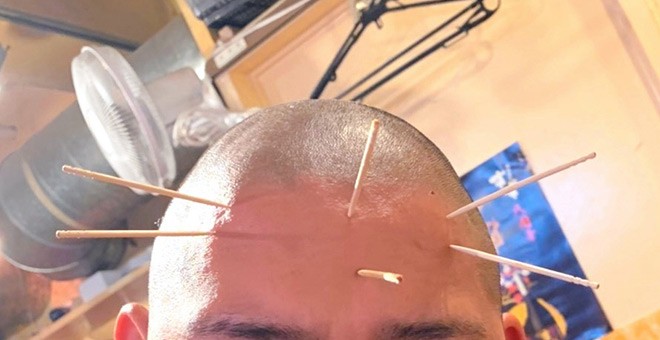 The head coach of Nihon University’s rugby team stuck toothpicks into a player’s head. (Provided by a source)

Nihon University rugby players accused the school of brushing aside the reign of terror of their former head coach, who tortured a player with toothpicks and threatened to kill “snitches” and their families.

The players reported the many problems with the coach’s behavior to senior staff members, hoping the university would make good on its “students first” promise that was made after an earlier scandal over an intentional injury ordered by coaches in an American football game.

But instead of reprimanding the rugby coach or ordering him to say sorry to the players, the university allowed him to quietly resign for “family reasons” without a word of apology for his verbal and physical abuse, the students said.

“Nothing has changed at all since the American football scandal,” one of the players said.

According to reports written by rugby team members and testimonies from people involved with the club, the head coach in his 40s frequently forced one player to drink alcohol from April to May 2019, even though the victim was a minor at the time.

The reports said that abuse mainly occurred at a student dormitory in Inagi, western Tokyo, where the coach shared a room with multiple team members.

In one incident, the minor passed out after being forced to chug straight liquor with a high alcohol content.

In August the same year, when the team held a training camp in Nagano Prefecture, the head coach became inebriated and started talking to a team member about relationships. He then bit the player’s ear and shoulder and kicked him in the face, the reports said.

During a barbecue, the head coach burned another player by pressing a hot spatula into his left upper arm.

In November, the head coach took several team members to a barbecue restaurant, where he stuck seven toothpicks into a student’s head.

Even after leaving the restaurant, the player was not allowed to remove the toothpicks. With the toothpicks still protruding from his head, the team member stopped by at a convenience store and returned to the dormitory.

“Based on the head coach’s everyday behavior, I knew that he would never stop until I did (what he told me to do),” the team member recalled. “It was painful, but I had to take it.”

The head coach’s act of forcing the minor to drink became known outside the team in May 2019.

He sent a series of text messages to the minor via the Line app concerning the leak.

“I wanna kill the snitch,” he wrote. “I wanna destroy everything. I will (kill) an entire family when I’m really upset.”

But the head coach continued with the threats.

“Should I let my yakuza friend find the snitch?” he wrote. “I wanna shoot drugs into the entire family and destroy their lives.”

The coach’s messages were shared among the team members. They said they felt “spine-chilling horror” and developed “abysmal fear” because of the head coach.

All team members on Feb. 28 this year signed and submitted a written letter demanding the dismissal of the head coach. A report detailing the coach’s assaults and abuse was attached.

The documents were handed to the club’s “integrity team,” which had been set up after a team member was arrested on suspicion of marijuana possession in January and the team’s activities were suspended.

The rugby team’s vice director, who is also a professor at the university’s medical school, heads the integrity team and interviewed both the players and the head coach.

The vice director acknowledged the allegations of abuse were true, according to Katsumi Nakano, the team’s manager, and Satoshi Hirayama, the team’s director who is a professor at the university’s dental school.

Nakano and Hirayama said they were informed of the investigation results and agreed that the head coach had to go.

But immediately after investigation, the head coach asked for permission to step down because he “needed to take care of his father.”

Nakano and Hirayama accepted his resignation.

Asked why they let the abuser quit on his own terms, Hirayama said: “We didn’t want to add fuel to the fire. We wondered what would happen to his future if we (removed) him for a problem of this size, and we made a judgment.”

In mid-March, the head coach informed the players that he was quitting, according to sources close to team.

“He said he was leaving because his parent was sick. That’s it,” one source said. “He didn’t explain about (what he did) nor did he offer an apology.”

The players were also upset that Nakano, who is in charge of the team, provided no explanation, either.

“Team members blew the whistle on the head coach, yet (those in charge) acted like nothing happened,” one lamented.

Nakano rebutted the players’ recollection of the events, saying the head coach had told the team members, “I am sorry that my coaching was poor.”

Hirayama also said he believed the problem had been resolved because “I apologized to all team members about two days before the head coach talked to them about his leaving.”

The head coach told The Asahi Shimbun that his decision to resign was not made because of his actions.

“I left because my father happened to become ill at the time,” he said.

He declined to comment on the reports of abuse made by team members.

Nihon University’s rugby team, which plays in the Kanto League’s first division, won three championships during the 1970s and 1980s.

The coach joined the team in 2016 and assumed the top coaching position the following year.

The team placed second in the final league tournament last season and reached the final eight in the university championship tournament.

In 2018, the university’s American football team admitted that its head and assistant coaches ordered a linebacker to make a flagrant tackle against an opposing quarterback, who was hospitalized after the late hit.

After that scandal, the university leadership pledged reforms under a “students first” slogan.

It set up a new department to manage competitive sports clubs under the university president’s direct governance.

A university official said the new department has instructed the rugby team to strengthen team management and take preventive measures.

“We are trying to get the facts with the help from the rugby team and will respond to the (matter),” the official said.

(This article was written by Tomoaki Hosaka and Ryota Kyuki.)