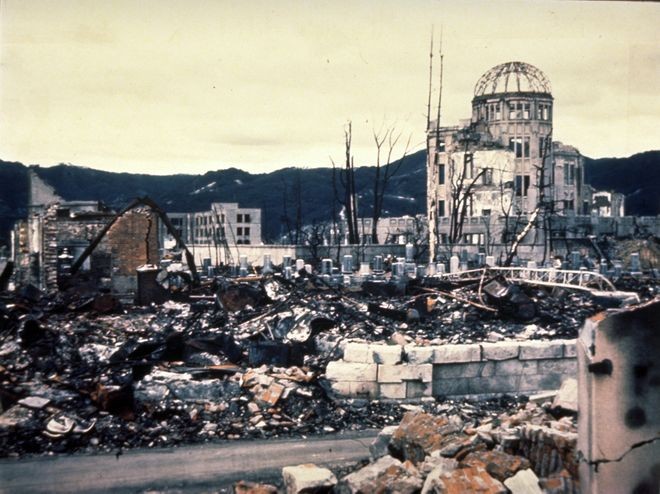 The Atomic Bomb Dome in Hiroshima is seen in this color photo taken by the U.S. Army in 1945. (U.S. Army via the Asahi Shimbun)

Seventy-five years ago today, students in the second-year west class of Hiroshima Prefectural Second Girls’ High School suffered from the atomic bombing at a site where they had been mobilized to work.

“I am sorry, miss,” one of the students is recorded as saying in her dying words. “I failed to take the final roll call properly.”

The words are attributed to the president of the west class, who is remembered as having a strong sense of responsibility. She and her classmates, who would have been second-year junior high school students by today’s standards, were working only 1.1 kilometers from ground zero.

All but one of the 39 students at the site died within two weeks of the bombing.

The students joined hands when they ran for safety, only to get separated because their skin was slipping off from burns. They were taken to a hospital, where they were denied medicine because, in the words of officials, they were beyond help.

Seki, the author, was also a student in the west class, but she escaped death because she stayed home sick from school that day. She writes in her book that she was told she was “lucky” to survive, but then asks: Does that mean that those who were killed in the atomic bombings were just “unlucky”?

Three-quarters of a century have passed since the atomic bombs took 140,000 and 70,000 guiltless lives in Hiroshima and Nagasaki, respectively. Nuclear weapons continue to exist in the world, where they remain on standby for use.

Perhaps all of us contemporaries of the atomic age are only narrowly surviving.

Nuclear war has come within an inch of erupting on several occasions due to misinformation that a missile attack was launched by an adversary country, a former U.S. secretary of defense told The Asahi Shimbun during an interview.

A calamity comes without any previous sign until immediately before it befalls us humans. And so was the case with Hiroshima on that horrendous summer day.