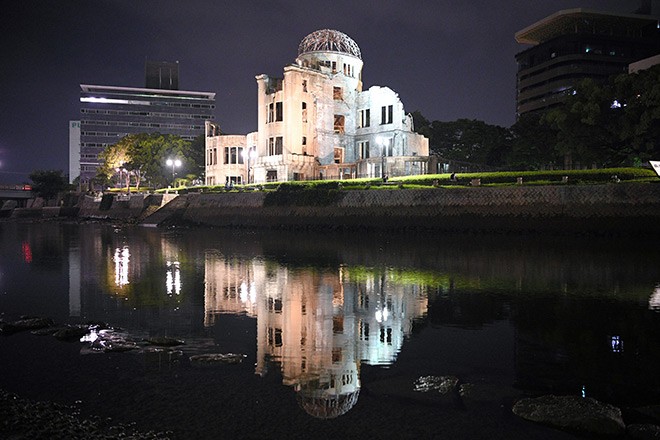 The Atomic Bomb Dome is seen in the early morning on Aug. 6. (Nobuhiro Shirai)

“Hiroshima was firebombed.” “It appears that (the city) has suffered slight damage.”

These passages are part of a very brief Asahi Shimbun report about the atomic bombing of Hiroshima published the following day.

It was just the beginning of the tragedy of the world’s first use of nuclear weapons. Three days later, Nagasaki was also destroyed.

The instant a tremendous flash of light cut across the sky, high levels of radiation penetrated the bodies of hundreds of thousands of people. The detonation and deafening boom were followed by various radioactive materials spreading across the city.

Seventy-five years on, a local court recently handed down a landmark ruling recognizing all people exposed to the radioactive rain as hibakusha, or atomic bomb survivors, eligible for a government relief program including those who were outside the areas covered by the program. But the trial still failed to clarify the geographical scope of exposure.

'DISCOVERY' OF HEALTH HAZARDS OF RADIATION

None of the people who were under the mushroom cloud on that summer day or those who entered the city immediately afterward knew the true magnitude of damage caused by an atomic bomb.

No ordinary citizen had any idea about how exposure to radiation could cause suffering over a long period of time.

It was not until 1954, nine years after the end of World War II,  that the long-lasting health hazards of exposure to radiation became widely known. In that year, the United States detonated a thermonuclear bomb in a nuclear test at Bikini Atoll in the Pacific.

The Daigo Fukuryu Maru, a Japanese tuna fishing boat, was contaminated by radioactive fallout from the test, known in Japan as “shino hai” (deadly ash). One of the crew later died of radiation poisoning.

The incident triggered a broad protest movement against nuclear weapons in Japan. Housewives in Tokyo’s Suginami Ward and other areas led the campaign under the slogan, “We don’t want atomic-bombed tuna on our dinner tables.”

In 1955, the following year, the first World Conference Against Atomic and Hydrogen Bombs was held in Hiroshima. In the city, where cases of leukemia were surging, Sadako Sasaki, a 12-year-old survivor of the atomic bombing, died the same year.

Her name became associated with “senbazuru,” 1,000 origami folded-paper cranes tied together on a string often made in prayer for health or peace, because she folded cranes to wish for her recovery.

Many of the people who survived the horrors of the blast and heat began to realize how the aftereffects of their exposure to the radiation were ravaging their bodies.

In 1956, the Japan Confederation of A- and H-Bomb Sufferers Organization (Nihon Hidankyo) was founded, launching a movement to demand that the government pay compensation for hibakusha’s health problems due to their exposure to the radiation.

In its declaration of foundation, titled “Greetings to the World,” the organization said, “The human race must never repeat the sacrifices and sufferings we have endured.”

It was the moment when the “hibakusha’s philosophy,” which regards nuclear arms as an absolute evil and calls for the elimination of all inhumanness in all parts of the world, was born.

GROWING PESSIMISM AND SENSE OF URGENCY

Since they first made their appeal for the elimination of nuclear weapons under this slogan at the United Nations in 1982, during the Cold War between the United States and the Soviet Union, hibakusha have been sharing their horrible experiences and their desire for a world without nuclear weapons with the rest of the world.

Their voices have created a wave of international support for their cause, which eventually led to the 2017 Treaty on the Prohibition of Nuclear Weapons, which bans countries from developing, testing, possessing and using nuclear weapons.

Hibakusha have good reason to become more pessimistic about the future of their cause. A recent Asahi Shimbun survey of more than 2,000 atomic bomb survivors across the nation for the 75th anniversary of the nuclear devastation, which was answered by 768, found many of them feeling strong frustration and anxiety.

More than half of the respondents said they did not think the world was moving toward the elimination of nuclear weapons, while more than 60 percent agreed with the view that the risk of a nuclear arm being used had increased in the past five years.

This may partly be because the leader of the United States changed from Barack Obama, who called for a “world without nuclear weapons” to President Donald Trump, who has pledged to pursue a “peace by force” agenda.

But hibakusha also took a dim view of the Japanese government’s policy.

Nearly 80 percent of the respondents said they did not think the Japanese government was committed to making serious efforts for the removal of nuclear arms from the world. Over 70 percent of the polled said Japan should ratify the nuclear ban treaty.

A 92-year-old man fumed that Japan’s failure to join the treaty will go down in history as a “national shame.”

The average age of remaining hibakusha is now 83 and their numbers have shrunk to a record low 136,682. The 75th anniversary of the atomic bombings means the arrival of an era when people who had firsthand experiences of the horrors of the nuclear attacks will gradually disappear.

This raises the question of whether younger generations will be able to share their sense of urgency with the same intensity.

In this landmark year, the world has fallen into the abyss of the new coronavirus pandemic.

“As people all over the world have faced the same crisis, (the pandemic) has served as an opportunity to understand that all the people on Earth are affected (by such a global problem),” he said during talks with researchers in May.

He argued that this experience will be a fresh start for the movement for the elimination of nuclear weapons.

While the pandemic has deprived young people of opportunities to take part in peace education events in Hiroshima and Nagasaki and listen to tales about the bombings told by hibakusha themselves in these cities, it has accelerated the use of the internet to promote the cause.

In late July, the Hiroshima Peace Memorial Museum and the Nagasaki Atomic Bomb Museum showed materials related to the atomic bombings of the cities in live streaming on social media for the first time. Over 6,000 people around the world, including many young people, watched the events.

Hiroso Niimi, an 81-year-old hibakusha, donated some 30 pencils that he used with now deceased schoolmates at “kokumin gakko” (national elementary school during wartime) to the Hiroshima museum.

“Helping young people around the world to gain accurate knowledge about Hiroshima would be greatly helpful,” Niimi says.

Seventy-five years have passed since the nuclear age began. But nuclear powers, and even the Japanese government, still remain wedded to the nuclear deterrence theory, which means when a country has nuclear weapons capable of mass destruction, it deters the activities of potential adversaries. This is a grim, disappointing reality of the world today.

But years of hibakusha’s efforts to send out their messages to the world have been an important source of inspiration for anti-nuclear activities involving a large number of non-nuclear powers, nongovernmental organizations and global citizens.

The international alliance of these people and organizations that bore fruit as the nuclear ban treaty is a precious legacy of hibakusha’s tireless, prolonged campaign.

Younger generations can build on this foundation by carrying on the torch of the hibakusha movement, which rejects inhumanness and demands “human security.”

Whether the vision of a peaceful world freed from the threat of nuclear weapons will become reality depends on each individual’s awareness and actions.