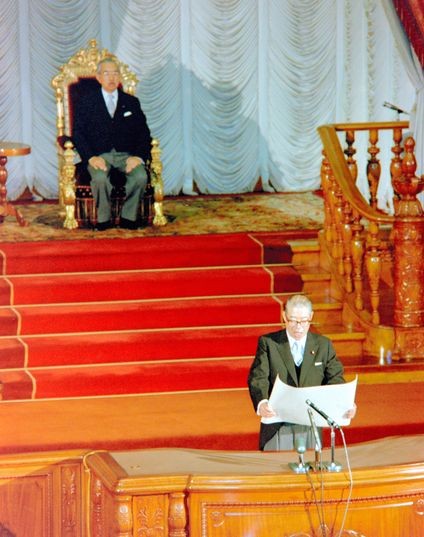 Private remarks by Emperor Showa seemingly influenced the Diet’s decision to approve an anti-nuclear treaty, according to notes made by a former prime minister’s secretary soon to be published in a book.

Miyoji Iwano, 86, an aide to former Prime Minister Takeo Miki, kept notes that suggest the words of the emperor, who was constitutionally limited to a symbolic role for the country, “inspired” the speaker of the Lower House to help approve the ratification of the Nuclear Nonproliferation Treaty (NPT).

The discovery sheds light on the fact that Emperor Hirohito, posthumously known as Emperor Showa, played a role in determining whether the treaty passed in the Diet, even though the postwar Constitution limited his role outside the realm of politics.

Sadao Hirano, who once served as a secretary to Maeo, writes in his book “Showa Tenno no Gokuhi Shirei” (Confidential orders from Emperor Showa), published in 2004 by Kodansha Ltd., that Maeo actively worked to get the treaty approved, in line with the “intention” of Emperor Showa.

Iwano’s description corroborates Hirano’s accounts, underlining how the emperor played a role in the treaty’s approval.

“The heads of both the Diet and the government shared the intention of the emperor, who likely wanted the NPT to be approved as soon as possible with relations with the United States in mind,” said Kei Takeuchi, an assistant professor of Meiji University’s School of Political Science and Economics, who examined the notes.

“The records by Iwano reinforce the fact by depicting the story from the Miki side.”

The Japanese government signed the treaty in 1970. But some lawmakers from the Liberal Democratic Party opposed the pact, so Tokyo did not ratify it until June 1976--which meant that Japan still had the right to nuclearize up to that point.

Iwano’s notes show that the secretary visited Miki’s home in the Nanpeidaicho district of Tokyo’s Shibuya Ward on May 24, 1976, when the Diet finally agreed to the treaty. When Iwano expressed “congratulations on the NPT,” Miki said it “must pass as early as possible.”

“Maeo was surprised at the emperor’s asking why the NPT had not been approved, inspiring him to work harder,” Miki is quoted as saying in the personal records.

According to Iwano, Miki did not allow him to record their conversations when they met. But Iwano jotted down the prime minister’s comments after returning home.

Iwano donated his records to Meiji University, where Miki used to study, and Takeuchi analyzed them.

“Miki spoke in a very honest fashion in front of Iwano, and the material indicates what Miki was thinking at the time,” said Takeuchi.

The contents of the notes will be published in the fall at the earliest by Yoshida Shoten, under the title “Miki Takeo Hisho Biboroku” (Memorandums by a secretary to Takeo Miki).