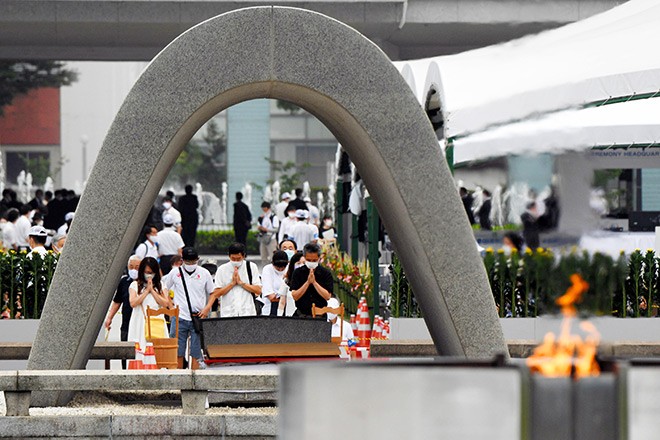 HIROSHIMA--A solemn ceremony on Aug. 6, much smaller than usual, marked the 75th anniversary of the U.S. dropping of the atomic bomb on Hiroshima.

Held amid the pandemic, this year’s ceremony was scaled down as a precaution to prevent the spread of the novel coronavirus.

In what would have otherwise been a major event for survivors and those pushing for nuclear disarmament, only 785 participants whose temperatures were checked were allowed into the main venue at the Hiroshima Peace Memorial Park to mark three quarters of a century since the bombing.

In past years, about 50,000 people, including hibakusha who survived the atomic bombing, bereaved family members and foreign diplomats gathered in the park to offer a minute of silent prayer at 8:15 a.m., when the atomic bomb detonated over the city and killed tens of thousands of people.

“Rumor at the time had it that ‘nothing will grow here for 75 years.’ And yet, Hiroshima recovered, becoming a symbol of peace,” he said.

Matsui also addressed concerns about stalled global efforts to eliminate nuclear weapons. He renewed his request to the Japanese government, which continues to depend on the nuclear umbrella of the United States for its national security, to sign a nuclear ban treaty.

“To enhance its role as mediator between the nuclear-weapon and non-nuclear-weapon states, I ask the Japanese government to heed the appeal of the hibakusha that it sign and ratify, and become a party to the Treaty on the Prohibition of Nuclear Weapons,” he said.

However, Prime Minister Shinzo Abe, who also addressed the gathering, made no mention of that treaty.

“While maintaining our three non-nuclear principles, we will make efforts to serve as a bridge among nations with differing views and persistently encourage dialogue and actions among the various nations,” Abe said.

Concerns about spreading COVID-19 reduced the size of various elements of the ceremony.

A record low 23 representatives of bereaved family members traveled to Hiroshima from various parts of Japan. Only 83 nations sent ambassadors or other dignitaries.

U.N. Secretary-General Antonio Guterres decided not to attend in person, only appearing in a video message shown during the ceremony.

In past ceremonies, hundreds of doves were released soon after the Hiroshima Peace Declaration was read.

Those birds were brought to Hiroshima every year a few days before the ceremony by members of two Tokyo-based organizations that handle racing pigeons. But the two organizations canceled the trip this year because many of its members are elderly, and because of the overall reduction of the ceremony’s size.

Larger areas in and around the park were also closed off to the public, which was forced to find new ways to observe the 75th anniversary of the atomic bombing.

As an alternative, the park was opened from 5 a.m. for two hours so people could pray before the cenotaph for atomic bomb victims. However, they had to follow a one-way course to the site and practice social distancing.

Chikako Shimizu, 90, is a Hiroshima resident who visited the park to mark the anniversary. She said while she took part every year in the ceremonies, she received no notice about this year’s event.

Her sisters perished during the atomic bombing. Their home was only 1 kilometer from ground zero.

“I can still hear the voices of small children walking around with their skin hanging down and saying, ‘It hurts,’” Shimizu said. “Even if I cannot attend the ceremony, there will be no change in my prayer for peace.”

(This article was compiled from reports by Takashi Togo, Akina Nishi, Risako Miyake and Naohito Tsujimori.)