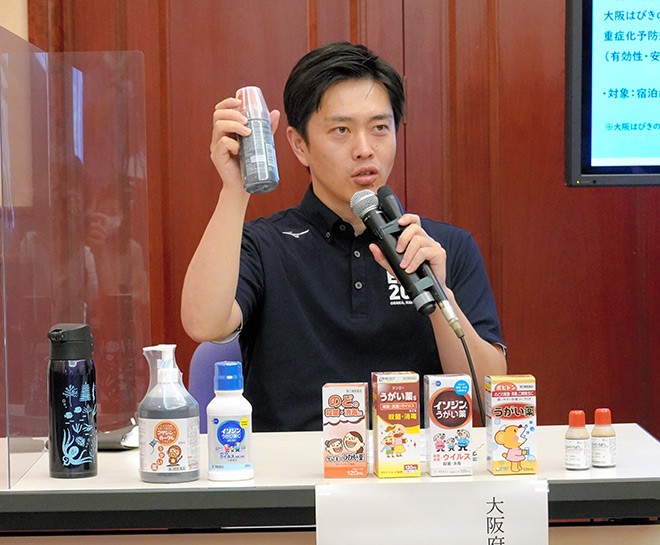 Osaka Governor Hirofumi Yoshimura doubled down on his suggestion that gargling mouthwash reduces the risk of novel coronavirus infections, fueling panic-buying and widening criticism from health experts about the unproven method.

The Osaka prefectural and city governments, together with the Osaka Habikino Medical Center, on Aug. 4 released the results of research on mouthwash containing povidone iodine (PVPI).

They said that study showed that gargling with such mouthwash four times a day decreases the rate of positive results for COVID-19 from polymerase chain reaction (PCR) tests on saliva.

Yoshimura said the gargling method might not be effective from the standpoint of the Pharmaceutical and Medical Device Law.

But he told the news conference: “Mouthwash that contains PVPI is commercially available, such as Isodine. I want gargling to be strictly enforced.”

His statement immediately raised doubts and concerns among medical experts.

“To begin with, there is just not enough information to say whether or not (gargling) is good,” Shigeru Omi, chairman of the central government’s panel of experts to deal with the novel coronavirus pandemic, said at a news conference the following day.

“I need more verification before making a judgment,” he said.

A health ministry official echoed Omi’s cautionary comment and also cited a lack of scientific basis for the mouthwash claim.

“If they recommend (gargling) as being effective against the novel coronavirus, they need to show evidence,” the official said.

The research results that Osaka officials released compared people who gargled with mouthwash containing PVPI and those who did not gargle at all.

The study did not cover other subjects, such as people who gargled with water. That raises the possibility that an infected person in the study may have tested negative because the mouthwash only decreased the amount of the virus in his or her saliva.

Despite the medical experts’ views, mouthwash products have continued to fly off the shelves. The mouthwash hoarding has led to safety and even legal concerns.

Excessive iodine can cause side effects in pregnant women and patients with thyroid ailments.

“If a person develops a side effect and it becomes an issue, the question of liability can arise,” Toshio Takatorige, a professor of public health at Kansai University, said.

Under fire from critics, Yoshimura held another news conference on Aug. 5 and explained that “mouthwash is not a prophylactic or curative drug.”

However, he did not retreat from his earlier remarks about gargling.

“I think we can beat the coronavirus by (gargling),” he said. “It is likely to contribute to preventing infections from spreading.”

“Government leaders should present a scientific strategy to contain the pandemic, rather than recommending that people in Osaka follow a research finding that has little scientific basis,” he said.

In many places, even outside of Osaka Prefecture, the disappearance of mouthwash from store shelves has angered some shoppers.

“I was already fed up with masks and toilet paper being sold out for a long time,” said a 36-year-old company employee in Osaka’s Nishi Ward. “I just want to say, ‘Stop this nonsense. Everybody, please, calm down.’”

A 41-year-old woman in Ikoma, Nara Prefecture, said she has followed Yoshimura on Twitter to get the latest information about the pandemic.

“He didn’t exactly say that gargling mouthwash can prevent the novel coronavirus, but people have been reacting to his statement,” she said. “I want (Yoshimura) to be more cautious when spreading information.”

“He invited this situation by making such a statement in middle of an unpredictable situation where the public is worried about a ‘second wave’ and no vaccine is available,” Ikeuchi said.

The professor said she is not necessarily against gargling as a “basic preventive measure.”

(This article was written by Kumiko Yamane and Taichi Kobayashi.)