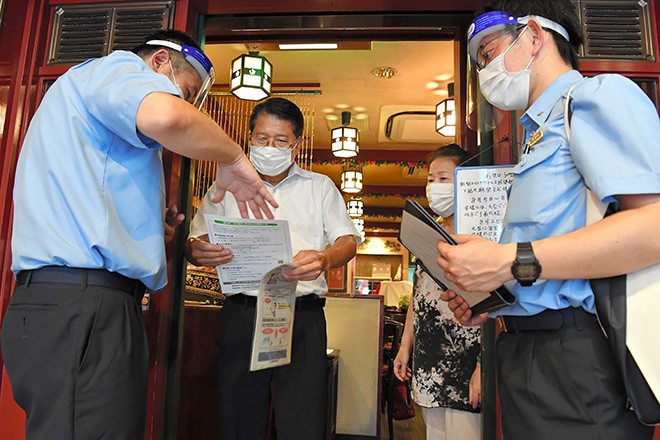 NAGOYA--With COVID-19 cases topping 100 for nine consecutive days, the Aichi prefectural government declared its own state of emergency at an anti-coronavirus meeting on Aug. 6.

The state of emergency will continue for 19 days until Aug. 24.

“During the summer vacation when almost all companies and schools are closed, we would like all residents to restrain their behavior and try to drastically curb virus infections,” Aichi Governor Hideaki Omura said at the meeting.

He said of the possible extending of the state of emergency, “I would like to check the infection situation right after the Bon mid-summer holidays.”

According to prefectural officials, it entered the "red zone," the highest level on its warning index. Nagoya TV Tower, located in the city center, will be illuminated in red on the evening of Aug. 6.

The local government is asking eating and drinking establishments that offer companionship services in the entertainment and shopping Nishiki and Sakae districts in central Nagoya to suspend operations or cut business hours.

It also is asking residents to restrain their behavior during the annual Bon holidays and refrain from traveling across prefectural borders if not urgent or necessary.

The declaration calls on the public to not have meals or parties in a group of five or more; reconsider visiting hometowns; and refrain from traveling if their health is not good. It also asks residents to check the latest information provided by local governments of their travel destinations and take full preventive actions.

At the same time, Omura told reporters after the meeting that he will allow residents to travel to the neighboring prefectures of Gifu and Mie because those three prefectures in the Tokai region, including Aichi, share the same economic zone.

Governors call for testing boost ahead of easing entry curbs