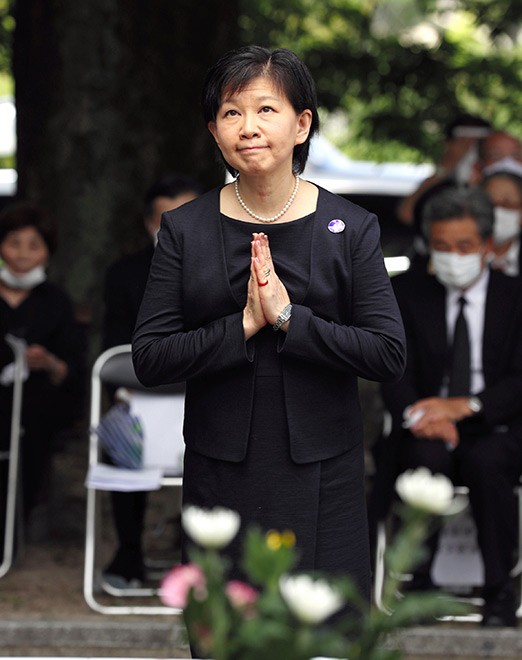 For Izumi Nakamitsu, skipping a visit to Hiroshima and Nagasaki to commemorate atomic bomb victims because of the pandemic and strict travel regulations was not an option.

The U.N. undersecretary general and high representative for disarmament affairs arrived in Japan to attend an Aug. 6 peace memorial service for atomic bomb victims in Hiroshima.

“To hibakusha (atomic bomb survivors), I have promised I will visit (Hiroshima and Nagasaki) as long as I am in the U.N. undersecretary general position. So I made the decision on my own.”

Nakamitsu completed a two-week self-quarantine after entering Japan, a requirement during the novel coronavirus pandemic. She was also expected to attend a memorial peace prayer ceremony for atomic bomb victims in Nagasaki on Aug. 9.

In mid-July, The Asahi Shimbun interviewed Nakamitsu online, prior to her departure from the United States to Japan.

“Even in comparison to the Cold War years, the nuclear threat has heightened more today,” said Nakamitsu, expressing strong concern over the international situation regarding nuclear arms.

She urged the Japanese government, which has not ratified the U.N. Treaty on the Prohibition of Nuclear Weapons, to give its full attention to the treaty.

The United States and Russia possess more than 90 percent of the nuclear arms in the world. But the road to nuclear disarmament in the two countries has been stagnant.

Forty countries have signed the treaty, which was adopted in 2017.

Nakamitsu said the treaty is “an important one because it strengthens the standard that nuclear weapons must not exist in the world.”

“Compared to other armament reduction treaties, the speed of ratification has been the same or fared well,” she said.

Nakamitsu said she is confident that, sooner or later, 50 countries, the number needed to implement the treaty, will ratify it.

In reality, nuclear nations have opposed the ratification of the treaty.

Nakamitsu defended the efforts of the United Nations.

“We are not talking about the armament reduction issue as a dreamy idea," she said. "We have recognized it as a tool for security.”

Being under the U.S. nuclear umbrella, the Japanese government has taken a negative stance to ratification of the treaty.

“I want the Japanese government to face the treaty and have a thorough discussion on how to deal with it,” Nakamitsu said.