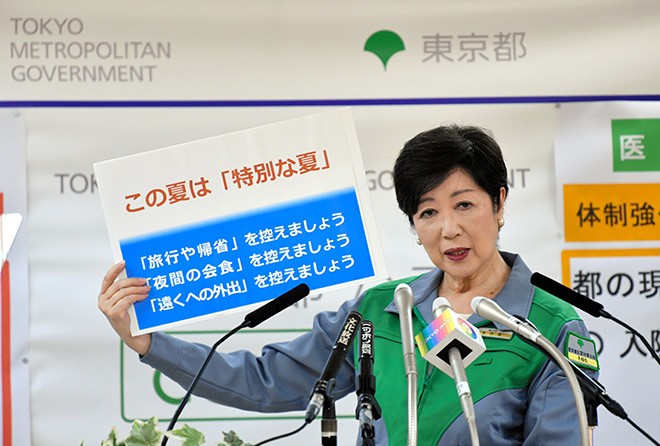 Tokyo Governor Yuriko Koike holds up a panel that reads, “This summer is a ‘special summer’” at a news conference on Aug. 6. (The Asahi Shimbun)

Tokyo Governor Yuriko Koike on Aug. 6 called on Tokyo residents to refrain from returning to their hometowns during the Bon mid-summer holidays.

“This summer is a special summer. The top priority is to overcome the novel coronavirus,” she told a news conference.

“I ask you to refrain from traveling outside the capital and from returning to your hometowns. I expect you to communicate with family members and relatives who live far away through the telephone and other means.”

Tokyo recorded an average of 346.3 new daily cases over the past week, as of Aug. 5, government officials announced on Aug. 6.

The average suggests Tokyo is recording just over 1,000 new cases every three days.

Many of the patients who tested positive for the virus this summer have been younger people, but an expert at the Tokyo metropolitan government meeting on Aug. 6 said that could change.

“The number of people testing positive is increasing among people in their 40s or older, so it is necessary to be cautious about the trend,” the expert said.

According to Tokyo officials, the number of hospitalized patients increased to 1,475 as of Aug. 5, breaking the previous record of 1,413 (set May 12), which had been the highest number since mid-May, when comparable records became available.