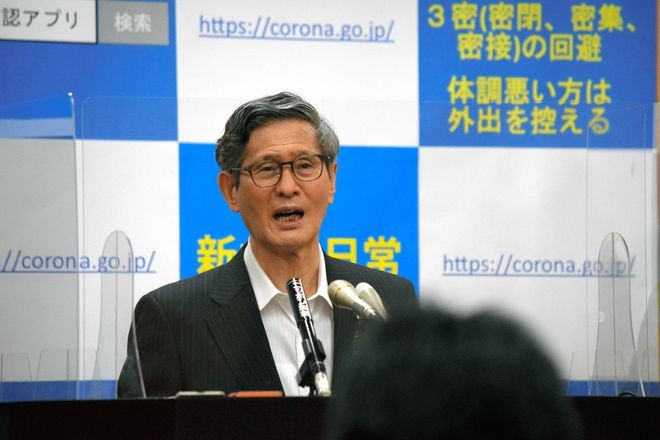 Shigeru Omi, chairman of a government panel of experts dealing with the novel coronavirus pandemic, at a news conference on Aug. 5 (The Asahi Shimbun)

The government remains in deep disarray in its response to the new coronavirus pandemic.

Since policymakers are dealing with an unknown, insidious virus, they should be forgiven if they make missteps in tackling the challenge of performing a delicate balancing act between containing the outbreak and keeping the economy alive.

But the government’s actions have bred distrust among the public because it has failed to offer sufficient and convincing explanations about its decision-making process. People have been left in the dark about the grounds for policy decisions or discussions leading to them.

The “Go To Travel” campaign to save the tourist industry, which is on life support after receiving a crippling blow from travel restrictions, has been the most symbolic example of the problem.

The government ignored the urging of its expert panel on the handling of the coronavirus crisis to be cautious in launching the subsidies program amid signs of a resurgence of cases, according to Shigeru Omi, head of the panel, which is composed of experts in infectious diseases and economic issues.

“We called on the government to take time in deciding on when to start (the campaign), but our proposal was not adopted,” he said at the Diet in late July.

The government is within its rights to make policy decisions that are at odds with the panel’s views and opinions. If such decisions are made, however, the government should explain the reasons meticulously and show its commitment to accepting responsibility for the consequences.

But the document about the decision to start the campaign published by the government includes passages that can be interpreted to indicate that the panel had proposed launching the campaign while excluding trips in which Tokyo is the departure point or the destination. This is clearly misleading.

The mission of the expert panel is defined as considering measures to be taken and offering its “opinions” to the government. Its mandate is not to endorse government decisions, much less to make policy decisions.

The situation makes us remember what the panel’s effective predecessor, an expert council headed by Omi himself, said about the roles and responsibilities of the experts.

The advisory council’s mission, it said, is to make proposals based on analyses and assessments of the situation. It stressed it is the government that is responsible for policy decisions and their consequences. The council called for clarifying the roles and responsibilities of both.

There are other problems with the way the panel is operated.

Its meetings are not open to the public under the pretext of ensuring free, unrestricted exchanges of views and opinions. It is supposed that excerpts of each meeting’s minutes are created and published along with the names of those who made specific remarks disclosed.

But no such document has been published yet. The process has been too slow and opaque.

In addition to publishing the materials used in the panel’s meetings, the government should also disclose, swiftly, the analyses and arguments made by members to promote broad public debate on related issues and offer information useful for efforts by people and organizations to take preventive measures on their own.

The government’s advisory board on COVID-19, which has been set up to evaluate the effectiveness of policy responses to the pandemic, apparently has similar concerns about the way the government has sought the counsel of experts.

Kiyoshi Kurokawa, who chairs the board, Shinya Yamanaka, a professor at Kyoto University and member of the board, and two other experts have jointly recommended that the roles of the experts and the government should be sorted out for more transparent debate on how to deal with the pandemic.

If the government wants to regain public trust in the way it is handling the public health crisis, it should start by demonstrating its commitment to making policy decisions on its own and accepting the responsibility for their consequences while learning from experts and respecting their views and opinions.