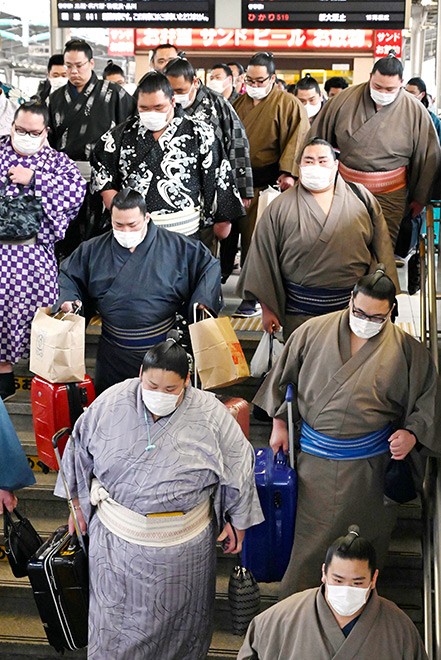 Following after-hour scandals during the recent summer tournament, sumo wrestlers have been given 16 commandments for safe behavior if they wish to go out on the town.

The rules, set by the Japan Sumo Association, govern such practices as eating out and sanitizing measures to prevent the spread of the novel coronavirus.

After the final day of the 15-day July Grand Sumo Tournament at Tokyo’s Ryogoku Kokugikan on Aug. 2, sumo officials issued the “16 strict compliance rules” to association members including wrestlers.

As an anti-virus measure during the pandemic, wrestlers were put on a curfew and asked not to go out for nonessential purposes before the spring tournament in March.

The new rules apply to wrestlers during the post-July tournament break.

“This is very important. If you don’t comply with these rules, we will ban you from going out,” the notice said.

Under the rules, wrestlers have to tell their stablemaster where they are going and who they will be meeting before obtaining permission.

They are also required to record their daily activities.

Wrestlers must follow the news and obey instructions from the central and local governments.

When meeting someone, wrestlers must make sure the person does not show symptoms such as a high fever, coughing or sneezing.

As dining out is among one of the favorite pastimes for many wrestlers, the JSA has set strict protocols for this practice as well.

Firstly, wrestlers are not allowed to dine with a stranger. They are not even allowed to eat with wrestlers who belong to a different stable.

Wearing a mask is a must when going out. Attending an after-dinner party is a no-no.

Wrestlers have to finish dining out within two hours.

They are told to visit only restaurants that have taken anti-infection measures such as providing proper air ventilation and placing acrylic boards to keep customers from each other.

The wrestlers are warned not to eat at establishments that lack proper air ventilation.

The list includes, “Do not drink too much,” apparently referring to the recent incident involving stablemaster Tagonoura.

Tagonoura broke the protocol and went out to eat at night during the July tournament. Later, a picture of him being drunk and passed out at a restaurant was posted on social media.

The JSA also is instructing wrestlers not to order a big platter of food to pass around or to share drinks.

The rules apply to wrestlers even after returning to their stables.

They are required to wash their hands, do a sanitizing routine and take a shower immediately in order not to bring the novel coronavirus in the stable.

The Autumn Grand Sumo Tournament is scheduled to open in Tokyo in September. Wrestlers are to remain in their stables and not go to a different stable for training.

Last but not least, the commandments warn wrestlers: “Do not go to clubs where hosts and hostesses entertain customers.”

Abi, 26, a makuuchi division wrestler who belongs to the Shikoroyama stable, visited a club where women serve and entertain customers, four times before and during the July tournament.

The JSA on Aug. 6 suspended Abi for three tournaments and cut his salary.

Officials said Abi lied during JSA’s internal investigation and asked fellow wrestlers who went out with him to lie as well.