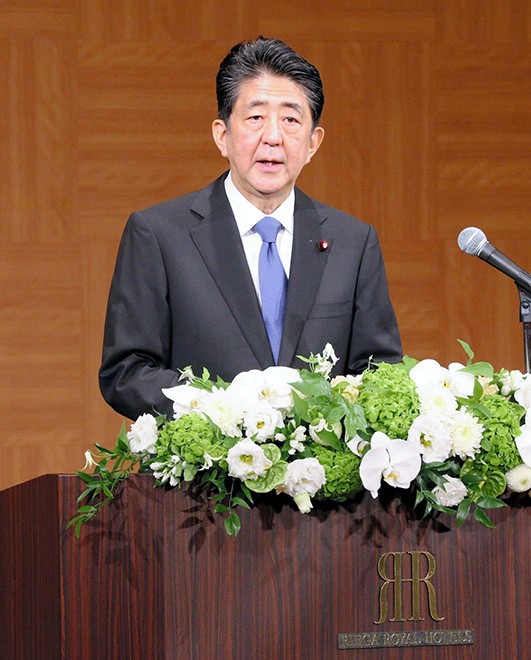 Prime Minister Shinzo Abe’s first news conference in nearly 50 days lasted for only 15 minutes and came amid criticism that he has been missing in action during the resurgence of novel coronavirus infections.

The news conference in Hiroshima on Aug. 6 left reporters frustrated at Abe’s lack of answers to their intended questions.

It was held after Abe attended the memorial ceremony marking the 75th anniversary of the atomic bombing of Hiroshima.

Abe has always talked to reporters following such ceremonies in Hiroshima, so his latest news conference could be considered almost like a regular one.

The last time Abe held a news conference was on June 18 immediately after the ordinary Diet session closed.

Since then, the nation has seen an increase in COVID-19 cases, and the public has demanded answers about what the government is doing to handle the new wave in novel coronavirus infections.

Abe on Aug. 6 spent about seven minutes explaining government measures to prevent the spread of the virus. He also indicated the current situation did not warrant the issuing of a second state of emergency.

One follow-up question revolved around why Abe has not held more news conferences.

“Today, I set aside time to talk about how we are dealing with the pandemic,” Abe said. “I want to continue to hold news conferences at appropriate points in time.”

He added that the government has been providing explanations about the situation through Chief Cabinet Secretary Yoshihide Suga’s daily news conferences and the frequent ones held by Yasutoshi Nishimura, the state minister in charge of economic revitalization who is the government’s point man in dealing with the pandemic.

Abe was also asked if the central government would appeal the recent Hiroshima District Court ruling that widened the definition of hibakusha (atomic bomb survivors) to include people affected by “black rain” that fell on Hiroshima after the bombing.

Abe did not give a clear response on what the central government planned to do.

Reporters also asked Abe about his responsibility for appointing a justice minister who resigned and was later indicted, along with his lawmaker wife, in a vote-buying scandal.

The prime minister was also asked about his apparent desire to change the national security posture to allow for first-strike capability against enemy bases.

Abe again did not provide a clear response to these questions.

A number of other issues have surfaced during the dearth in news conferences held by the prime minister.

Between February and May, Abe held a total of eight news conferences, including one to declare the state of emergency over the pandemic.

After his news conference on June 18, Kumamoto Prefecture and other parts of Kyushu suffered serious damage caused by torrential rain.

And as the number of COVID-19 cases increased, the government last month went ahead with its “Go To Travel” tourism promotion campaign despite concerns about the spread of infections.

Abe has continued to respond to reporters’ questions directed his way as he enters and leaves his office, but such exchanges usually last for only a few minutes.

Officials in the prime minister’s office pointed out that other state leaders, like German Chancellor Angela Merkel and U.S. President Donald Trump, have also not held news conferences frequently.

Also on Aug. 6, The Asahi Shimbun lodged a formal protest with the Press Office of the prime minister’s office over a male staff member who grabbed the arm of an Asahi reporter who was trying to ask Abe a question.

After the four questions were answered, the Asahi reporter asked a fifth question to which the prime minister replied. But before another question could be asked, the Hiroshima municipal government employee who was moderating the news conference said it was over, and Abe left the room.

That is when the Press Office staff member grabbed the Asahi reporter’s arm.

However, a subsequent written response from Kenji Tominaga, the head of the Press Office, denied that the reporter’s arm was grabbed.

Tominaga explained that the staff member’s action was intended to ensure that Abe made it in time to Hiroshima Airport to catch the flight back to Tokyo.