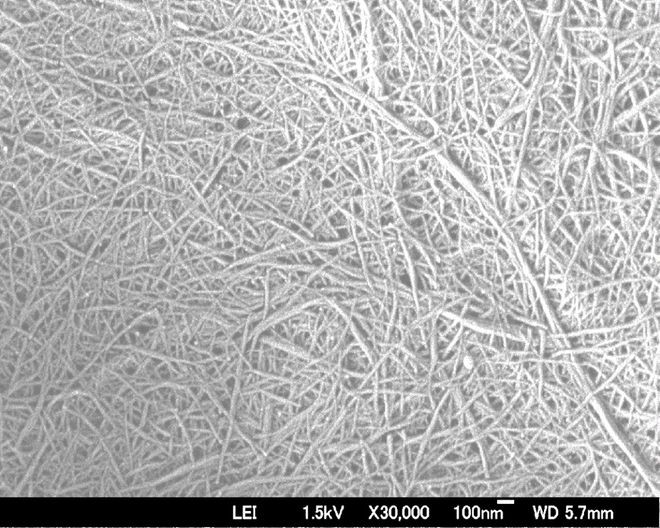 The chitin nanofiber extracted from crab shell is shown with an electron microscope. (Provided by Shinsuke Ifuku, a professor of chemistry at Tottori University)

One man's trash is another man's treasure, so the proverb goes. But crab shells and eggshells?

The former, it turns out, are an ingredient for moisturizing cream once the shells and claws have been pulverized, while grounded eggshells are used in nutritional supplements.

Food makers these days are trying to reduce waste as part of a drive to realize a more sustainable society. The upshot is that substances generated from food processing are being put to use.

For example, Tottori Prefecture, the nation's leading crab catch center, produces huge mounds of crab shells when the seafood is processed into canned and other products.

Shinsuke Ifuku, a professor of chemistry at Tottori University, made a study of food waste to assess the recycling potential of crab shells.

It has been found that chitin, the main component, is effective in healing wounds. However, the material does not break down in most solvents, which makes processing it extremely difficult.

Ifuku solved the problem by crushing chitin with a special technique and nano engineering the material into fiber the thickness of one ten-thousandth of a human hair, making it easy to process.

As chitin nanofiber can be used in moisturizing and hair growth lotions, as well as in the treatment of injuries, Ifuku established a start-up firm to pursue research into the material's uses for moisturizing cream, scalp lotion, moisturizing gel for pets and other related products.

“I hope that ways can be found to reuse waste that would otherwise be discarded, thus providing a valuable resource in contributing to the revitalization of local industries,” Ifuku said.

Food manufacturer Kewpie Corp. recycles all eggshells and eggshell membranes generated in the production processes of mayonnaise and other products.

The egg waste is washed, crushed and dried so it can be converted into fertilizer and distributed to the company’s partner farmers. Research shows that such fertilizer can improve the viscosity, taste and yields of rice even under bad weather conditions, if it is scattered over paddies and fields.

Calcium carbonate accounts for 94 percent of the eggshell composition, so Kewpie also developed a calcium-based dietary supplement for both domestic and overseas sales.

Taking advantage of a characteristic of the eggshell that has about 10,000 tiny holes per egg, tiles and wall materials with dehumidifying and deodorizing effects have been created as well.

“We make full use of all materials under the policy of “mottainai” (don’t waste),” said Naoki Takeuchi, a team leader of Kewpie’s sustainability promotion department.

The food recycle law, which came into force in 2001, stipulates that 95 percent, 60 percent and 50 percent of food waste should be reused by food manufacturers, foodstuff retailers and restaurant operators, respectively.

According to the Ministry of Agriculture, Forestry and Fisheries, 17.67 million tons of food waste was produced across the food industry in fiscal 2017.

Food manufacturers met the government target by utilizing 95 percent of 14.11 million tons of the food waste as resources.

However, the reuse ratio for restaurants was only 32 percent, partly due to the difficulty of finding alternative uses for food not eaten by customers or consumed by shelf life dates.

Starbucks Coffee Japan Ltd., which comes under the umbrella of the restaurant industry, recycles no less than 48 percent of coffee bean waste as well as other ingredients.

Its 1,600 outlets across the nation produce 6,600 tons of used beans annually. The waste from stores in the Kanto and Kansai regions is processed into food for cattle and fertilizer for vegetables.

Milk from cows raised on the reused food is served at Starbucks cafes, while lettuces, cucumbers and other crops cultured with the help of the fertilizer are sold in sandwiches. Bean waste is also reintroduced as an ingredient for trays used at some coffee shops.

“We must add value even to waste ingredients such as used beans,” said Rei Fukawa, manager of Starbucks Coffee Japan’s sustainability team. “We will further expand and continue our mechanisms for recycling.”