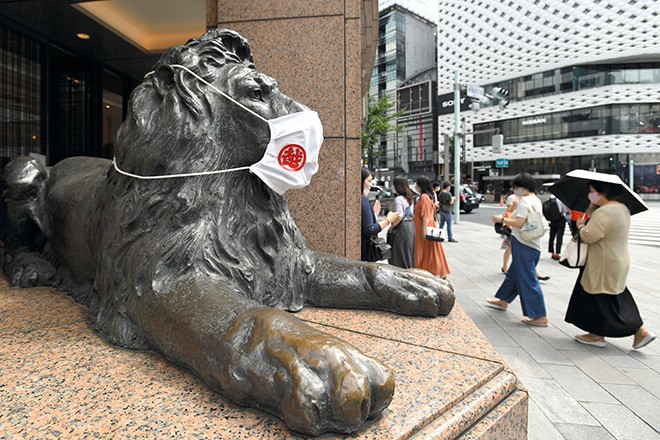 Pedestrians in Tokyo’s Ginza district on Aug. 1 pass by a statue wearing a mask. (The Asahi Shimbun)

It also marked the 11th straight day of more than 200 new cases.

Tokyo metropolitan government officials said the daily average of new COVID-19 infections for the week ending Aug. 6 was 345.3, meaning infections were increasing in the capital at a pace of about 1,000 every three days.

While the core age group of new infections this summer has been the young, an Aug. 6 meeting of experts monitoring the spread of infections noted an increase in the number of those 40 and older testing positive for COVID-19.

It recommended that greater attention should be paid to this age group in the future.

The number of people hospitalized for COVID-19 stood at 1,476 as of Aug. 6, which exceeded the 1,413 on May 12. Records kept by the Tokyo metropolitan government that can allow for a comparison only go back to mid-May.