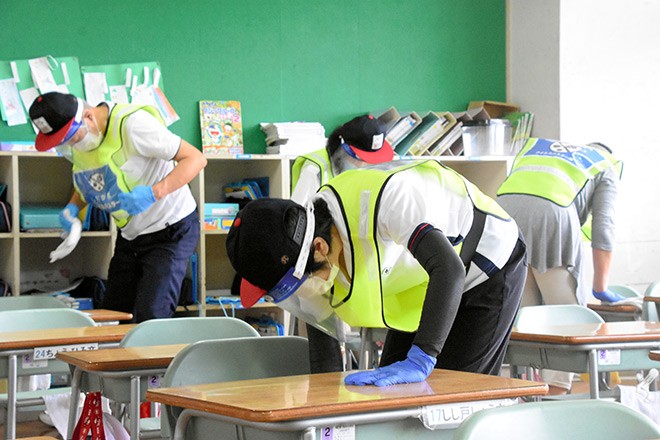 Volunteers in their 60s or older disinfect desks at an elementary school in Shiogama, Miyagi Prefecture, as a precaution against COVID-19 infections. (Natsuki Kubokoya)

The education ministry announced on Aug. 6 that 242 schoolchildren tested positive for COVID-19 nationwide in June and July, with more than half contracting the new coronavirus from their family members.

It also said it has revised its public health management manual on “new lifestyles at schools.” The new guidelines call on schools to avoid “excessive” disinfections of classrooms by teachers and to allow removal of face masks when it gets hot outside.

The ministry compiled reports it received, mainly from municipalities, from June 1, when most schools resumed classes, through July 31 on infected children who attend elementary, junior high and high schools, as well as special needs schools. It then provided the results of its review to local education boards and other concerned parties across the country.

According to the ministry, none of the 242 cases developed serious symptoms.

Of these, 137, or 57 percent, caught the virus from their family members, while for 57, or 24 percent, it was unclear how they contracted COVID-19.

Eleven, or 5 percent, became infected at school. Public health centers determined there were four cases of such group infections, but the ministry said there were many other cases where multiple students and teachers in the same classroom or club contracted the virus.

Fifty-one teachers and other school staff tested positive for COVID-19, but it was not clear how 35 of them, or 69 percent, got the virus. At kindergartens, 16 children and 13 teachers and staff were confirmed to have become infected.

Under the revised public health guidelines, the ministry is urging schools not to force teachers to carry out “excessive disinfections.” The ministry said it heard about many instances where teachers became exhausted and, at some schools, disinfected the floor every day or even the soles of pupils’ indoor shoes.

As for face masks, its manual previously said that “it is desirable to wear (them) all the time, in principle.” But that line has been updated.

“(Face masks) should be put on when it is difficult to maintain enough physical distance from each other,” it now reads.

The manual also notes that masks should be taken off when temperatures and humidity levels are high.

The manual outlines that schools normally need to close for one to three days when infections are discovered. It says that is just enough time for schools to identify who has come into close contact with infected individuals and then have them tested.