VOX POPULI: Gems of child care poetry emerged in the shadow of war 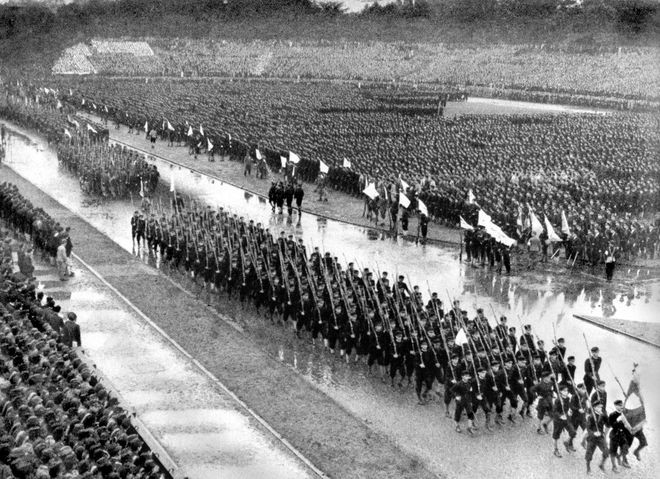 University students drafted into the military march in a ceremony held in Tokyo in October 1943. (Asahi Shimbun file photo)

The August issue of Haiku Shiki magazine features a special section dedicated to works of haiku themed on child care, including quotations of masterly 17-syllable poems from bygone years.

“The little one coughs/ Playing a game of riddles/ With no end in sight.” So reads a work by Teijo Nakamura (1900-1988), evoking the image of a child stuck at home with a cold and importuning the mother to play along, which she does, despite her embarrassment.

“As I beat my little one/ A moment felt like eternity/ Under a heaven of cicadas.” This haiku by Fujio Akimoto (1901-1977) is themed on the feeling of remorse the author felt after hitting his child.

“In a myriad of green leaves/ The first tooth appears/ In my little one.” This work of Kusatao Nakamura (1901-1983) is brimming with a praise for the force of life.

Haiku poet Kasen Nishikawa pointed out in the magazine’s special feature that a number of noteworthy works of similar haiku were created before and during World War II.

“A bundle of haiku masterworks themed on child care emerged at a time when war was inevitable and children had to be sent to the front if they were ever born,” Nishikawa said.

Perhaps a dark age hones the sensibilities of those who look at their own children.

“The family register! Go to ashes soon! May nobody remember about my son!

“Oh son! Go wrapped inside my palm! Go lost, for a moment, inside a hat!”

These lines are sufficient testimony to the author’s tragic desire to shield his son from military service.

Kaneko went so far as to deliberately jeopardize the health of his sickly son in trying to delay his call-up for military service. He made his son stand in the rain and forced him to inhale smoke in a locked room.

Kaneko said in his autobiography that he believed everyone should use his or her own ingenuity in rejecting the military.

There was once a time like that in Japan. And this mechanism called war invariably claims the lives of young people.