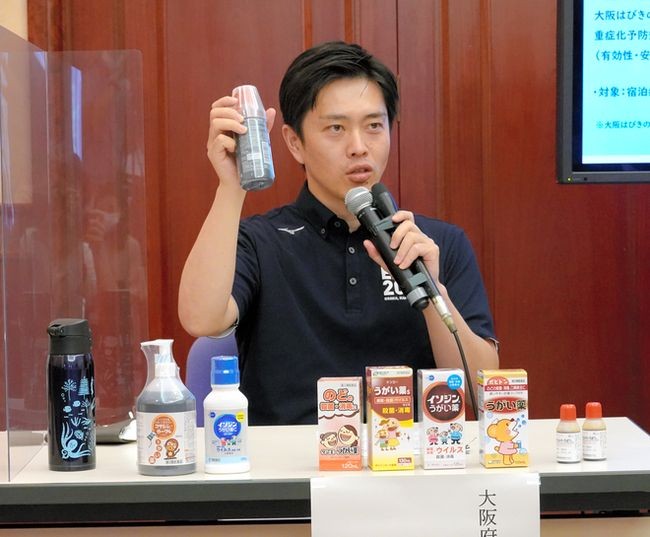 Osaka Governor Hirofumi Yoshimura on Aug. 4 urges the public to gargle with mouthwash that contains povidone iodine. (The Asahi Shimbun)

Osaka Governor Hirofumi Yoshimura deserved to be taken to task over his ill-advised suggestion that gargling with mouthwash reduces the risk of novel coronavirus infection, as there is no solid scientific evidence to support this contention.

Yoshimura, in an Aug. 4 news conference, presented the results of a study on the effectiveness of mouthwash containing povidone iodine (PVPI), an antiseptic, for preventing COVID-19 infections. He claimed the outcome of the study indicated that gargling with such mouthwash decreases the test positive rate.

He called on residents of Osaka Prefecture, especially families with members showing potential COVID-19 symptoms such as fever, to use mouthwash.

Since Yoshimura has made a name for himself through his high-profile performance in dealing with the outbreak, his remarks triggered a massive rush to buy mouthwash products, not just in Osaka, but also in many other areas, depleting drug store shelves. Some gargle products were resold online at high prices.

The following day, Yoshimura soft-pedaled the idea, saying it is a “misunderstanding” to think mouthwash products prevent or cure COVID-19. Still, his indiscreet remarks were roundly criticized by experts. “There is not a scrap of evidence at the moment” to prove that the treatment is effective, the Japan Medical Association said.

During the study, residents of the prefecture who had tested positive for the virus but showed no or only mild symptoms were divided into two groups. One group was told to gargle with mouthwash four times a day, while the other group did nothing special.

When polymerase chain reaction (PCR) tests using saliva samples were performed on all the subjects four days later, the positive rate for the gargling group was significantly lower, according to the medical experts involved.

Yoshimura and the experts claim mouthwash could prevent infections via droplets or the development of severe symptoms due to saliva containing the virus that has entered the lungs. But the medical community remains unconvinced, with many questions raised about the scientific rigor of the study.

For one thing, only 41 test subjects were involved in the research. The doctor who led the study has acknowledged that dozens or even hundreds of subjects are far from sufficient for a scientifically rigorous study to evaluate the effectiveness of a treatment for preventing infections through droplets.

The doctor said he will continue the study to assess the effectiveness of mouthwash as a means for preventing infections through this route and the development of serious conditions by using 2,000 or so subjects.

The way Yoshimura spoke about the study is also open to question. In his first news conference on this topic, he described the results of the study as “an unbelievable but true story.” He also said this treatment “could help us beat the coronavirus.”

His overzealous attitude, despite his repeated reference to the fact that it is still a “possibility,” was one of the factors that caused the “misunderstanding.”

Medical experts pointed out other flaws and problems with the mouthwash study. For example, no group involved which was told to gargle with ordinary water for comparison.

Critics also noted that mouthwash containing PVPI, although sold at drugstores, should be used with caution, especially by pregnant women and people with thyroid problems. Even if the virus in a patent’s saliva is reduced, that does not equate with an overall reduction within the body, they say. This treatment could lead to a false negative in testing.

Yoshimura stressed the importance of political leaders “making policy decisions and getting the message across to the public.”

But political leaders are, of course, also responsible for ensuring that the decisions and calls they make are appropriately timed and based on sound methods and accurate facts.

There are still many unknowns about the coronavirus, which makes it easy for false or inaccurate information to spread.

To avoid unnecessary confusion, it is vital to implement policy measures based solely on solid science. Yoshimura’s blunder should be a cautionary tale for all political leaders.