Benchmarks for gauging stage of COVID-19 spread across regions 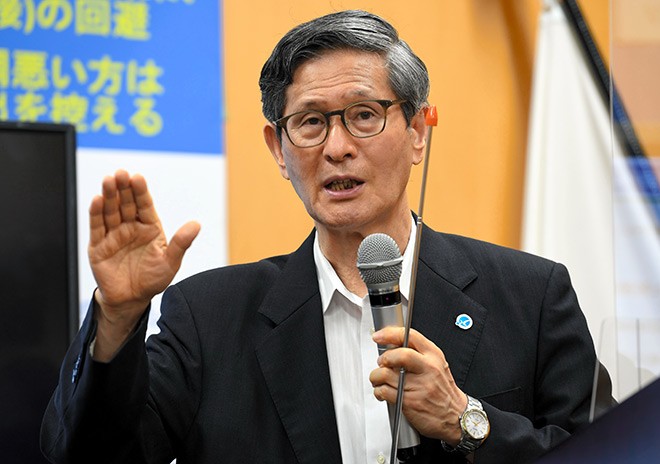 Shigeru Omi, chairman of a government panel of experts dealing with the novel coronavirus pandemic, holds a news conference to explain the panel's analysis. (Reina Kitamura)

Six yardsticks will be used to evaluate how a region is faring in relation to the spread of COVID-19 infections, according to a panel of experts advising the government on the health crisis.

The steps announced on Aug. 7 include the extent to which the medical care structure is being utilized.

The indicators are intended to be used in line with a four-stage classification system recently announced by the panel.

But Shigeru Omi, the panel chair, made clear that no single indicator should be considered the trigger for deciding the stage of infection spread.

He said a comprehensive decision would depend on the level of all of the indicators and the degree of severity found in each region for each category.

The final decision on the stage a prefecture is in will be made by the prefectural government. The benchmarks are also intended to be referred to by the central government in deciding whether to declare a second state of emergency.

The classification system was intended to spur government officials to take swift action when the first signs of a region approaching a higher stage were detected.

The fourth stage means a region is witnessing an explosion of new infections, while a region in the third stage denotes a sudden surge.

The indicators would be used to assess if a prefecture was moving to either the third or fourth stages. No indicators were released Aug. 7 in relation to whether a region is in the first two stages of sporadic infections or facing a gradual increase in infections.

The six indicators are: the percentage of hospital beds set aside for COVID-19 patients that are in use; the number of COVID-19 patients receiving medical attention per 100,000 people; the rate of positive results for polymerase chain reaction (PCR) tests; the number of new COVID-19 cases over the course of a week per 100,000 people; a comparison of that weekly figure with the previous week; and the percentage of patients with untraceable infection routes.

At the Aug. 7 news conference where the gauges were announced, Omi said, “If a region is preparing to push the button for stage four, that would be the timing for issuing a state of emergency.”

Central government documents distributed at the Aug. 7 panel meeting showed that Tokyo had exceeded five of the six indicators intended to assess that a region was moving toward stage three.

The three other prefectures of Osaka, Fukuoka and Aichi also had higher figures in five of the indicators to determine if a region is moving toward stage three. Okinawa exceeded four of the six indicators.

Regardless of whether the central government issues a national state of emergency, a number of prefectural governments, such as Aichi and Okinawa, have already issued such local emergencies for their localities and asked local residents to refrain from nonessential outings.

(Ayako Nakada and Tomohiro Yamamoto contributed to this article)