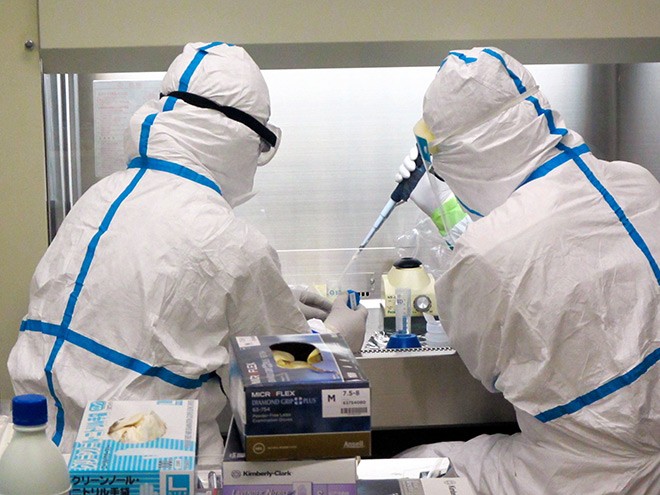 Thirty of the nation's 47 prefectures have inadequate levels of testing capability to confirm COVID-19 infections, a survey by The Asahi Shimbun shows.

The finding came as the health ministry announced Aug. 7 that a maximum of 56,000 or so polymerase chain reaction (PCR) and other tests would be needed daily to deal with a future spread of COVID-19 infections.

The figure was reached by totaling the amounts each prefectural government felt would be needed in their jurisdiction.

But the Asahi study conducted at the end of July found that 30 prefectural governments have yet to devise an adequate testing capacity to meet estimated future demand.

The health ministry, stating in June that the testing system needed to be strengthened, presented a model for estimating how many tests would be required in the future.

Its calculations were based on statistics between March and May on the number of COVID-19 patients in Japan and the rate at which those individuals developed serious symptoms.

The ministry asked the prefectural governments to estimate the maximum number of daily tests that would be needed and work toward establishing a system that would allow for that goal to be reached.

The health ministry total announced on Aug. 7 came to 55,933 tests for the entire nation.

Kumamoto Prefecture was not included in the total because prefectural officials there had their hands full dealing with the aftermath of torrential rains in July.

The Asahi contacted all 47 prefectural governments about their current testing capacity as of the end of July. All of them except Okinawa Prefecture responded, and the nationwide total was 42,203 tests, including those made available by private-sector testing companies.

The capacity had increased by between 1.1- and 23.9-fold compared with the capacity on April 7 when a state of emergency was declared for Tokyo and six other prefectures.

But only 15 prefectures had a testing capacity that exceeded the prefectural government’s estimate of the maximum daily number of tests that would be needed to cope with a future spread in infections.

During the first wave of the COVID-19 infection spike in spring, numerous cases emerged of individuals having to wait days for a test because testing capacity was so poor.

A similar situation could well arise again if a second surge occurs.

The health ministry estimates that by the end of September the national capacity for PCR and antigen testing will reach a maximum of 72,000 tests as prefectural authorities rush to purchase testing equipment.

The sudden surge in demand means that delivery dates in some instances have been pushed back.

Health ministry officials said local prefectures that do not have an adequate testing capacity should consider commissioning some of the tests to the private sector or cooperate with neighboring prefectures to cover the shortage.