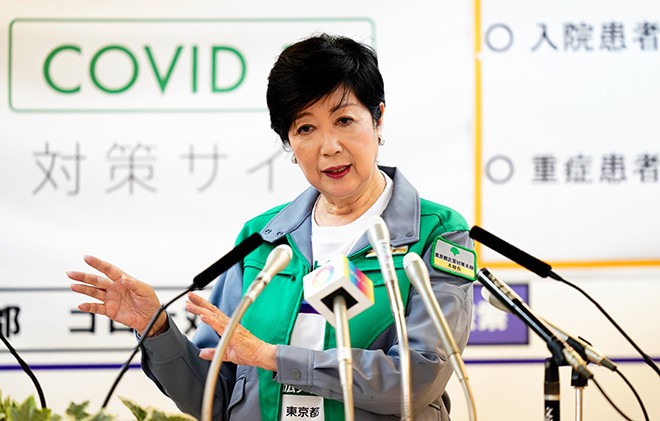 Two hospitals in the capital will be set aside to handle novel coronavirus patients so other medical facilities can return to treating outpatients for other ailments, Tokyo Governor Yuriko Koike declared Aug. 7.

She told a news conference that the plan would be in place by this autumn.

The Tokai University Tokyo Hospital in Shibuya Ward will commit 100 or so beds for COVID-19 patients by mid-September while the former Tokyo Metropolitan Fuchu Medical Center in western Tokyo plans to have a similar bed capacity by mid-October.

The Tokyo Medical Association had asked the metropolitan government to open specialized hospitals because the large number of hospitals in the capital taking COVID-19 patients had led outpatients to stop visiting for regular care and treatment.

According to Tokyo metropolitan government officials, the two specialized hospitals will care for patients with light or medium symptoms, such as those requiring a steady oxygen supply.

Before the two specialized hospitals can be opened, reconstruction will be required to install shower rooms, toilets and negative room pressure to prevent contamination between rooms.

The metropolitan government had previously unveiled a plan to secure about 4,000 hospital beds to deal with COVID-19 infections, but that number will increase to 4,400 or so with the expanded number of beds along with the two specialized hospitals planned for this autumn.

As of Aug. 7, there were 1,475 COVID-19 patients in Tokyo hospitals, while the metropolitan government now has 2,400 beds for such patients.

The metropolitan government also plans to open two lodging facilities with a total of 900 rooms this month where COVID-19 patients with no or minor symptoms can rest and recuperate. That would bring the total of such facilities to eight, with about 3,000 rooms in all.

As of Aug. 7, 415 individuals were using such facilities, while 477 were resting at home. Another 1,046 were still trying to enter a hospital or lodging facility.