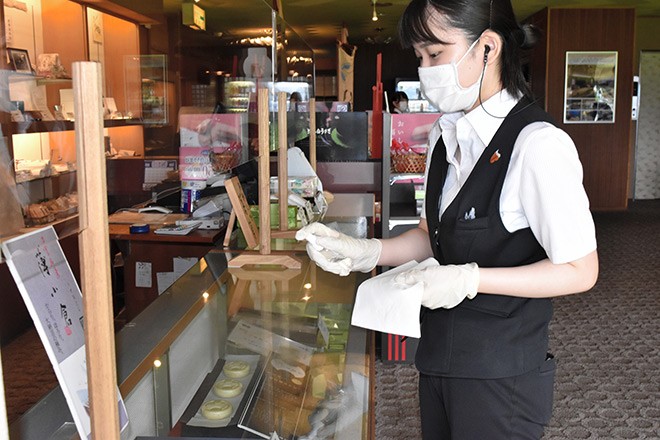 An employee disinfects a shop counter at a Japanese-style inn in Matsue, Shimane Prefecture, on July 31 as a precaution against the new coronavirus. (Shinya Okudaira)

A cluster infection at a high school effectively quadrupled the number of COVID-19 cases the western prefecture of Shimane has logged since the pandemic began.

Almost all of the 92 newly confirmed cases on Aug. 9  concerned students of the esteemed soccer club of Rissho Shonan High School in the prefectural capital of Matsue.

The count that day brought the overall total to 123 cases, compared with the 31 reported on Aug. 8 in the prefecture since the health crisis flared.

Of the 92 cases, 86 students and two teachers associated with the soccer club tested positive for the new coronavirus, prompting fears among city authorities of a cluster outbreak.

Thirty or so students were running fevers or complaining of headaches, but none of their symptoms were deemed serious.

Eighty of the infected students live in a dorm for soccer club members. The remaining six commute to school from home.

The soccer club, one of the nation's leading squads, has qualified 18 times to compete in the All Japan High School Soccer Tournament.

The school has about 330 students in total. Of that number, 138 are members of the club.

The first student to test positive for infection ran a fever topping 38 degrees on Aug. 5. Two days later, he lost his sense of smell and taste. The student's diagnosis was confirmed on Aug. 8.

The mass infections were confirmed at the school after a local public health center tested 149 individuals there following the boy’s case.

Okinawa Prefecture, meantime, reported a new daily high of 159 cases on Aug. 9. Seventy-one of the patients had worked or had a connection with an entertainment district in Naha.