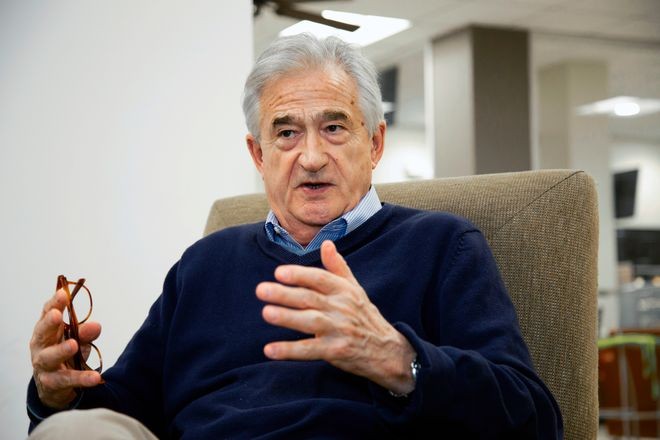 Antony Beevor during an interview with The Asahi Shimbun (Kaori Suzuki)

The British historian Antony Beevor has written a number of best-selling books about World War II. But in a 2012 publication, Beevor wrote that World War II started not with the German invasion of Poland, but actually through the Nomonhan Incident in the Far East.

He was asked what led him to that conclusion.

Question: Your work, “The Second World War,” starts with the battle of Khalkhin Gol. Could you explain why?

It was not a major battle in the scale of World War II clashes. But its influence was enormous. The Soviet victory discouraged the Imperial General Staff in Tokyo from attempting the Strike North strategy.

The Strike South faction within the Japanese armed forces, especially the Navy, did not want to attack into Siberia, but instead attack south into the Pacific to secure the oil supplies which they needed for their fleet.

And that of course had an influence on the German-Soviet war, which was one of the turning points of World War II. That is why I think it was essential to start the whole of the “Second World War” with the battle of Khalkhin Gol, also known as Nomonhan.

Q: You refer repeatedly to the impact of the battle of Khalkhin Gol on German-Soviet war.

A: The battle of Khalkhin Gol, or Nomonhan, was a major influence on the subsequent Japanese decision to move against the colonies of France, the Netherlands and Britain in Southeast Asia. This meant that the Japanese forces in China and Manchuria would not attack the Soviet Far East, but Stalin needed to be certain in the autumn of 1941 when Hitler’s divisions were advancing towards Moscow.

The information provided, including that of the spy Richard Sorge, made it possible for Stalin to start bringing in the Siberian divisions to Moscow to fight back against the Germans in October 1941.

Stalin needed above all, complete reassurance that Japan was not going to attack, even though it had signed a non-aggression pact with the Soviet Union. And that's why Richard Sorge was supposedly so important in providing the information from Tokyo, from his contact in the German Embassy. In fact, Stalin did not entirely trust Sorge. He was convinced much more by information from the interception of Japanese signal traffic.

The Siberian divisions fought extremely effectively, and their morale was high. They were also properly equipped for winter warfare, while the Germans were certainly not well prepared for the freezing conditions.

Also Soviet battle discipline was iron hard. For example, in September of 1941, when (Georgy) Zhukov, the commander at the battle of Khalkhin Gol, was made commander of the Leningrad front, when it looked as if Leningrad was going to fall to the German forces, Zhukov issued an order, saying that even the families of anybody who was captured by the Germans would be executed.

Q: You point out “the course of World War II might well have been very different had Japanese attack to Siberia been launched fall to winter 1941.” What would have been the result, if Japan had attacked Siberia?

A: I've never liked the whole idea of counterfactual history: the “what-ifs” of history. But if the Kwangtung army had won the battle of Khalkhin Gol, obviously then, there would have been more pressure on the imperial general staff in Tokyo to reinforce the Kwangtung army, and they might well possibly have taken the risk to seize part of Siberia.

I have seen Japanese plans for a possible invasion of Siberia, which had been looked at in the course of 1938 and 1939. This was just a wishful fantasy about seizing part of Siberia. So it is very hard to tell what the result would have been.

Q: You criticize the Japanese supply plan in Pacific and Asian fronts, saying “the Japanese chiefs of staff should have been condemned by their own people for crimes against their own soldiers.” Why?

A: I do write the history of war, rather (I write) military history. By that, I mean the suffering of civilians, as well as of soldiers on both sides.

Historians must not close their eyes, when it was the German women who suffered mass rapes, (two million of them, it is estimated, by the Red Army in 1945), or Japanese women suffering at the hands of Soviet soldiers in Manchuria.

In the battle of the Ardennes, the Americans killed German prisoners themselves, yet at the time only emphasized killings by the German SS. There has always been a certain hypocrisy about the way that people have written about the atrocities of their enemies, without acknowledging their own.

What every historian must do is to make the effort to be objective. I think the duty of a historian is to understand and to convey that understanding to the readers. It's up to the reader then to make the moral judgment. I'm not saying that a historian can be totally objective, but it is vital, I think, to face up not just to their own country’s victories and glories and all the rest of it, but also to their own mistakes and crimes.

Q: How should we cope with the conspiracy theories and revisionism today?

A: We've got lots of conspiracy theories today. Look at Donald Trump. Look at Vladimir Putin. Whether it’s Holocaust denial, there are many distortions of history. I think with all conspiracy theories, they can only be fought with the truth and with documents.

The basis of all conspiracy theories is to cherry-pick little bits from different reports, and then put them together in such a way that it makes a terrible conspiracy. It's like joining up the wrong dots, in a child's picture. If you can join up the wrong dots, you can create a totally distorted picture.

And I think that conspiracy theories can only be fought by serious historians showing the real documents. Perhaps even then, it’s still not going to stop them. Conspiracy theorists have become so much more powerful today than they were in the past. Now we have the internet, and that means not just a few isolated little groups on their own, but anyone anywhere can join up on the internet.

I personally, am against governments trying to regulate history. I'm against the idea in Germany and Austria, legislating against Holocaust denial. I think that that battle has got to be fought by historians.

Q: Your book starts with the battle of Khalkhin Gol and concludes with the Soviet invasion to Mongolia.

A: Well, whether it's ironic, or just purely a coincidence, World War II started and ended in a similar place. That was basically the last of the fighting. I'm not trying to make anything particularly significant out of it.

World War II was a total mixture, and not just a big battle between big countries. You cannot portray it as a fight between democracy and dictatorship. You can't even say that it's a fight entirely between good and bad. The Western allies, the British, the Americans and so forth, must acknowledge that they may have liberated the western part of Europe, but the eastern side of Europe was left in a new dictatorship under the Soviets, under Stalin. It's a very, very complex war indeed.

Q: What do you think is important in reporting the history of the war?

A: The sheer size of the numbers of the dead is dangerously numbing. It is vital to try to recognize the millions of ghosts from the mass graves as individuals, not as nameless people in caricatured categories.

The treatment of prisoners by guards in camps was appalling--throwing bread over the wire and then laughing, when they fought for the bread.

It was the way to reduce the prisoners to the level of animals, or even worse than animals, as if this proved that they were sub-human. I think it is one of the worst crimes, which emerged in World War II.

And I'm afraid one still sees in different form today, for example when you see the way that the Rohingya were treated in Myanmar. We still see these moments of complete dehumanization in some of the wars in Africa, as well as the examples of ethnic cleansing.

So, to say that we must have learned the lessons in World War II is not necessarily true.

(This interview was conducted by Misuzu Amano and Senior Staff Writer Yasuji Nagai.)

Antony Beevor, 73, has written a number of best-selling works on World War II and other military encounters, including "The Battle for Spain: The Spanish Civil War 1936-1939" and "The Second World War." He is a visiting professor at Birkbeck, University of London.