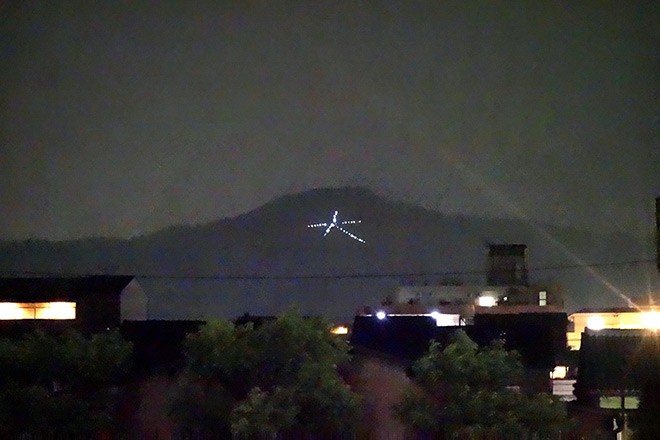 A character resembling "dai" is seen lit up in Kyoto’s Sakyo Ward on Aug. 8. (Provided by Masao Nomura)

KYOTO--Pranksters pulled off a spectacular stunt late Aug. 8 by lighting up a mountain slope on the eastern side of this ancient city with a giant rendition of the kanji character "dai," meaning big, apparently to fool residents that an iconic annual summer festival was being held as usual, only earlier.

The Gozan no Okuribi festival, known locally as "Daimonji," is traditionally held on Aug. 16 and involves setting the slopes of five mountains surrounding the ancient capital ablaze in a gesture to send off the spirits of deceased ancestors to the afterlife after revisiting their former homes during the Bon holiday season.

But the festival is being scaled back this year due to the novel coronavirus pandemic.

Startled residents alerted police around 11 p.m. to report the lights in the Mount Daimonji area. It later emerged the stunt was staged on Mount Nyoigatake in the city's Sakyo Ward.

Officers attached to the Kawabata station of Kyoto prefectural police scrambled to a rooftop and confirmed the light show.

“This is not the festival night. What on earth is going on?” he asked himself as he snapped photos of the lights.

The “dai” character is usually formed with giant bonfires lit at 75 spots. But this summer, festival organizers decided to reduce the number of locations to be lit to avoid a mass congregation of bonfire workers.

As a result, there are no plans this year for bonfires to denote the character.

The unexpected "dai" character, which police speculated was a prank, took residents as well as festival organizers by surprise.

"Usually, bonfires are like a wavy flame," Nomura said. "But this one was different. The light was bluish white and appeared to be very clear and artificial."

Hidefumi Hasegawa, the 75-year-old chairman of the daimonji preservation organization, was far from happy about the matter.

"It is upsetting because we spend a long time preparing to send off the spirits of our ancestors," he said. "With the assistance of the police and local administrative authorities, we will make sure this never happens again."