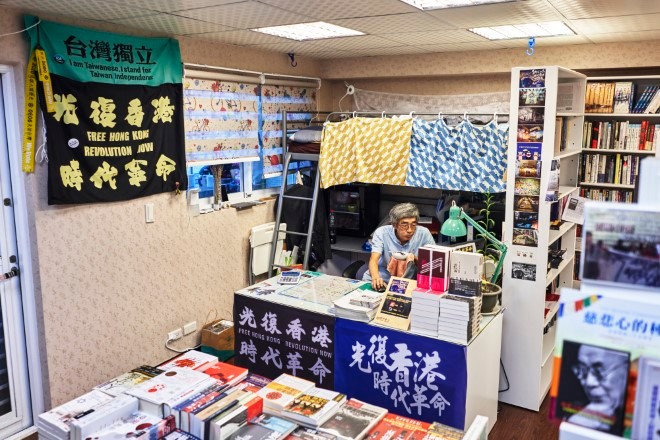 Lam Wing-kee, owner and manager of Causeway Bay Bookstore, in Taipei, Taiwan, July 16, 2020. The Hong Kong bookseller has recreated his shop in Taipei, and it has become a symbol of Taiwan’s vibrant democracy. (An Rong Xu/ © 2020 The New York Times)

TAIPEI, Taiwan — Inside a hushed bookstore in central Taipei one recent night, Ju Lee-wen stood beneath a large black banner that said “Revolution Now!” and raised her fist into the air.

Ju, a 26-year-old lawyer, is concerned by China’s increasingly authoritarian policies, including harsh new security laws in Hong Kong. She went to Causeway Bay Books, an irreverent shop stocked with volumes critical of the Chinese Communist Party, to show her support for democracy in Hong Kong and Taiwan.

“We have to fight to protect our freedom and our future,” Ju said.

Causeway Bay Books, which occupies a cramped room on the 10th floor of a drab office building, has in recent weeks become a gathering place for people worried about the future of Taiwan, a self-ruling democracy that China claims as its own. As China’s leaders lead a sweeping crackdown on free speech and activism in Hong Kong, fears are growing that Beijing may move to more aggressively bring Taiwan, too, under its control.

Hundreds of people come to the store each week to peruse books forbidden in the mainland. They pick up exposés on the private lives of China’s leaders, historical accounts of events like the Tiananmen Square massacre, and dystopian novels like George Orwell’s “1984.”

One book about China’s powerful leader, Xi Jinping, is titled, “The Zombie Who Rules the Country.”

Standing beneath banners calling for independence for Hong Kong, visitors join in occasional chants of “Fight for freedom!” On a wall of colorful sticky notes near the front door, they write withering criticisms of China. “Tyranny must die,” says one note.

Causeway Bay Books has become a symbol of Taiwan’s vibrant democracy at a time when the island is trying to promote itself as an alternative to China’s authoritarian system. The president of Taiwan, Tsai Ing-wen, visited recently, as have scores of government workers, students and commentators who are critical of China.

“It’s like a lighthouse of a free society,” said Leo Hong, 38, an employee at a state-owned company who visited one recent night to buy a book of photographs documenting anti-government protests in Hong Kong last year.

Many people come to catch a glimpse of Lam Wing-kee, the owner and manager, a bookseller from Hong Kong who fled to Taiwan last year. Lam was one of five booksellers who were abducted by Chinese authorities in 2015 for selling books critical of the ruling party. He was detained and spent five months in solitary confinement.

“He wants to let Taiwanese people know what kind of regime the Chinese Communist Party is,” said Chen Tsai-neng, 55, a radio show host who visits frequently. Chen said he often discusses China’s history of authoritarianism with Lam and other customers.

“He wants to tell people that the Chinese Communist Party and the individuals who are in power behind this cultural tradition are unreliable,” Chen said.

Lam opened the Taipei store in April, reviving the name of his old store in Hong Kong. From noon to 9 p.m. each day, he wanders around the store recommending books to customers, slipping out regularly to smoke on a balcony. The store doubles as his home; he sleeps on a bunk bed behind a cashier’s desk.

Lam said he wants the people of Taiwan to have a place where they can reflect on the challenges facing the island, including China’s efforts to isolate it politically.

“Taiwan is unstable right now,” he said. “And one thing is clear: China is giving Taiwan this instability.”

The bookstore has its share of critics. Some believe the selection of books offers a skewed portrait of modern China, focusing too much on negative portrayals.

The store has also ignited debate about whether Taiwan should accept political refugees like Lam. Tsai and her governing Democratic Progressive Party have vowed to help more activists from Hong Kong find shelter in Taiwan. Some members of the opposition party, the Kuomintang, believe such a move risks retaliation by Beijing.

Lam has become a target. In April, shortly before opening the store, two men attacked him with red paint as he walked to a breakfast shop in Taipei. The men were later arrested.

As tensions with the mainland rise, many visitors say they feel a sense of camaraderie at the store, where they discuss issues like military policy and whether Taiwan should seek formal independence, a move that Beijing has long adamantly resisted. Some worry about the possibility of a military conflict in which Taiwan would be caught in the middle, if relations between China and the United States continue to deteriorate.

The Chinese government’s decision in June to impose sweeping national security laws in Hong Kong, giving authorities broad powers to crack down on a variety of political crimes, has galvanized many Taiwanese to speak out.

“Some think what has been happening in Hong Kong is a glimpse into Taiwan’s future,” said Chen Wei-nung, 36, who works part time at a public opinion survey company.

The collections of sticky notes near the entrance mimic similar displays created last year by protesters in Hong Kong. There are doodles of Xi wearing a crown and quotes from Captain America. Tsai, Taiwan’s leader, left a note during her visit that read, “A free Taiwan supports Hong Kong’s liberty.”

Ju, the lawyer who visited the store recently, purchased a book on China’s internet controls as well as a history of the Hong Kong protests. Before she left, she stopped to write a message on the wall of sticky notes.