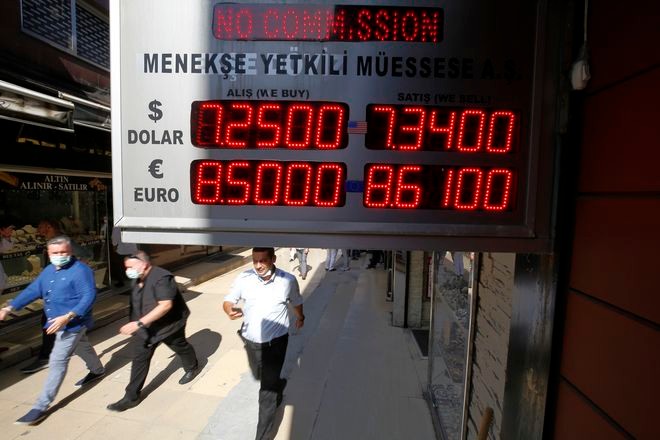 People walk past an exchange office in Istanbul on Aug. 7. (AP Photo)

The dollar held overnight gains on Tuesday following seven weeks of an almost relentless fall as investors clung to hopes of a bipartisan stimulus deal in Washington and U.S. bond yields rebounded from multi-month lows.

The dollar index jumped back to 93.597 from Friday’s two-year low of 92.495. Having fallen for seven straight weeks, the currency was due for a short-term corrective bounce, traders said.

“The dollar’s decline appears to have come to a halt for now. Although talks on fiscal spending are locked in a stalemate, we are at least avoiding a complete cutoff of extra jobless benefit,” said Minori Uchida, chief currency analyst at MUFG Bank.

“Compared to market consensus of a stimulus deal worth $1 trillion-$1.5 trillion, economic boosts from the announced measures would be clearly smaller,” said Takafumi Yamawaki, head of Japan rates and FX research at JPMorgan.

“Looking at market reactions, investors appear to think that there will be some sort of deal eventually,” JPMorgan’s Yamawaki.

U.S. congressional leaders and Trump administration officials said on Monday they were ready to resume negotiations on a coronavirus aid deal, although it was unclear whether Democrats and Republicans would be able to bridge their differences.

On Monday, the S&P500 index rose to a five-month high while the yield on 10-year U.S. Treasuries rose to as high as 0.581 percent, its highest level in more than a week.

Investors are also keeping an eye on the rapidly deteriorating relationship between Washington and Beijing.

U.S. Treasury Secretary Steven Mnuchin said companies from China and other countries that do not comply with accounting standards will be delisted from U.S. stock exchanges as of the end of 2021.

Elsewhere, the Turkish lira stayed near a record low hit on Friday on concerns about the country’s depleting foreign reserves, leading to expectations that the central bank may take more decisive action to stem its fall.

With more wild swings in the Turkish currency expected, implied volatilities, calculated from option prices, have soared, with three-month volatility rising to 26.5 percent, its highest since April last year.