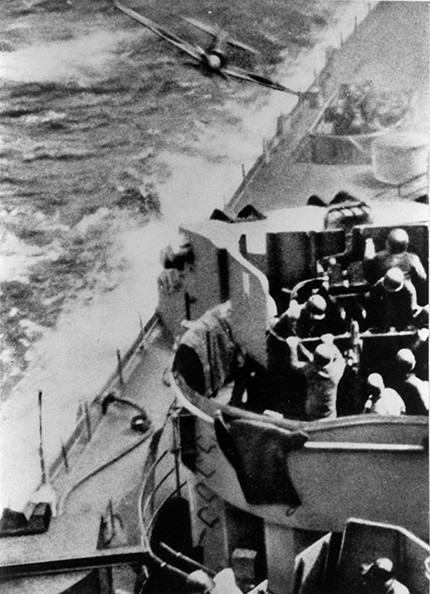 Japan's kamikaze missions in the waning days of World War II must rank as one of the strangest and scariest tactics ever devised in the annals of warfare.

In the event, the last-ditch effort to turn the tide of war to Japan's favor was an unmitigated failure.

By one estimate, 4,000 or so young pilots sacrificed their lives in their attempts to crash into and blow up enemy vessels.

However, a postwar study found that only 11.6 percent of aircraft used in the attacks actually hit their targets.

The mind-set that led young pilots to embark on the one-way suicide missions, either in aircraft or as human torpedoes, has been hotly debated ever since.

One thing seems clear, though. The ideology of emperor worship that prevailed in those days was deeply rooted in Japan's ancient history.

As to what possessed these youngsters in their prime to pay the ultimate price may best be explained by peer pressure. That may seem simplistic, but in the era they lived in, it reflected an overwhelming need to conform.

The parallels with life in the modern age, particularly with the new coronavirus pandemic raging, suggest, say some experts, that Japanese society in some fundamental way has not really changed all that much.

Even proponents of the kamikaze tactic questioned whether it was really a rational approach to the situation Japan found itself late in the war.

The first kamikaze suicide aircraft flights took off in October 1944 from the Philippines.

In autumn that year, Hiroshi Kuroki, a lieutenant in the Imperial Navy, took the initial step by submitting a proposal, dramatically penned in his own blood, asking for suicide mission volunteers.

In December, Kuroki, along with another Imperial Navy lieutenant, Sekio Nishina, presented their idea for using manned torpedoes. The proposal was formally accepted in August 1944, and the new weapon was given the name Kaiten, which roughly translates as “heaven shaker.”

While still training to use the Kaiten, Kuroki died at age 22 when he became trapped inside the weapon as it sunk to the ocean floor. He spent his final hours before suffocating writing notes about improvements that needed to be made, as well as his last will. Kuroki carved “Long live his majesty, the Emperor” into the hull.

One individual who seems to have played a major role in pushing Kuroki toward suicide missions was his mentor at what was then Tokyo Imperial University.

Kiyoshi Hiraizumi, a history professor there, began espousing a historical view that Japan was a “nation of god” during the early Showa Era (1926-1989) as Japan became more isolated internationally.

Hiraizumi had special reverence for Kusunoki Masashige, a pivotal figure in restoring 14th century Emperor Go-Daigo as ruler of the nation, and who gave up his life to ensure that happened.

Hiraizumi called on the Japanese people to demonstrate the same degree of loyalty to Emperor Hirohito and to be ready to sacrifice their lives for his sake.

That led to a movement of bronze statues being erected around Japan to honor Masashige. Locations that had some connection to the warlord became tourist attractions. Exhibitions about his life were held, and popular authors of the time wrote a number of works about Masashige.

“Japanese of the time were made to consider Masashige as the ideal Japanese, and that created an atmosphere of not being able to criticize calls for self-sacrifice on behalf of the emperor,” said Nobuyuki Konno, 46, an associate professor of Japanology at Kobe University who has written books about views of the modern Japanese state.

A number of units involved in the suicide missions took up Masashige’s name in their call to arms.

Takijiro Onishi, vice admiral in the Imperial Navy, was the main proponent of suicide missions in that branch of the armed services.

He called for a fight to the end and argued that Japan could win the war if “20 million Japanese” were prepared to give up their lives by taking part in suicide missions.

Morihide Katayama, 56, a professor of political ideology history at Keio University, said Onishi’s thinking was rooted in an ideology peculiar to military officers of the time, which was “all-out war.”

From World War I, war began to be viewed as something that required the involvement of the entire nation, including its economic power and technological ability.

But with the obvious inferiority of Japan in comparison to the highly developed nations of the West, military officials had to come up with new concepts to achieve total victory.

Suezumi Nakashiba, an Imperial Army officer considered a close associate of Hideki Tojo, the wartime prime minister, concluded that the only way to do so was to repeatedly engage in sacrificial attacks that went beyond the comprehension of the enemy.

That, in Nakashiba's view, would crush the morale of the enemy even if those forces still retained the means to continue fighting.

Onishi assumed the enemy would lose its will to fight if all Japanese joined suicide missions.

“Both Nakashiba and Onishi did not start out being irrational,” Katayama said. “However, when they used rational thinking to answer the question of how to win when overall national power was inferior, their conclusion was to depend on an extreme form of spiritualism”

But even those who were involved in suicide missions did not blindly agree with the strategies proposed by Onishi and Kuroki.

Kazushige Todaka, 72, a historian of the Imperial Navy who also serves as director of the Kure Maritime Museum, also known as the Yamato Museum, in Kure, Hiroshima Prefecture, said there was initial hesitation about the suicide missions.

However, once one was staged, a snowball effect took hold and the clamor to use nothing but such missions drowned out any more rational thinking.

“The Imperial Navy was a bureaucratic organization, so once a precedent was set, a ‘mood’ was established that made it difficult to resist,” Todaka said. “From a systemic viewpoint, fleet commanders could have rejected orders for suicide missions, but there were very few commanders with the courage to do so.”

Japanese society since ancient times has relied on what is often disparagingly referred to as the nation's group mentality to maintain order, as any scholar will attest.

But there are also strong echoes in the way Japanese society functions today, noted writer and theatrical director Shoji Kokami.

“Strong peer pressure arose once the general mood in society was one of suicide missions as the only way to protect Japan,” he said, likening that to the current situation over the novel coronavirus pandemic that led public officials to call on the public to refrain from nonessential outings and businesses being asked to close their doors.

“Businesses that continued operating were targeted for criticism over social media,” Kokami said.

He added that Japanese-style organizations and society has always had a violent side that sought “to survive by consuming the lives and happiness of each individual member.”