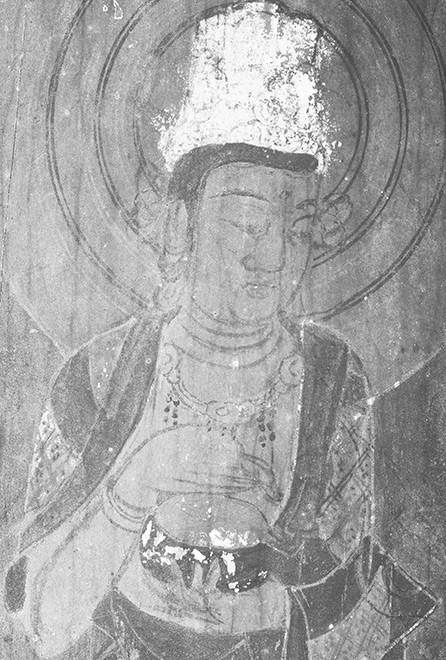 A Buddhist saint drawn on the column on the left side of the “shumidan” platform inside the Saimyoji temple’s Hondo main hall in Kora, Shiga Prefecture (Provided by Noriaki Ajima and Yukari Takama)

KORA, Shiga Prefecture--Researchers have discovered images of eight Buddhist saints drawn on two columns of a local temple’s Hondo main hall through infrared photography, which could date back more than 1,300 years.

The paintings of the standing saints on the columns of Saimyoji temple’s main hall, which is designated a national treasure, are barely visible to the naked eye since the columns were blackened by soot.

Among the researchers who made the discovery are Noriaki Ajima, a professor of art history at Hiroshima University, and Yukari Takama, a lecturer at Osaka Kyoiku University who also specializes in art history.

They said on Aug. 9 that there were traces showing that some work was done to the paintings around the Edo Period (1603-1867), but the original paintings were likely drawn earlier.

According to the two researchers, the paintings could date to the latter half of the seventh century during the Asuka Period (592-710) since the saints resemble the Kudara Kannon statue, a national treasure created in the seventh century, at the Horyuji temple, a World Heritage site in Nara.

The eight Buddhist saints depicted in the drawings are said to offer salvation to people. The paintings of the saints were found on each column at the right and left sides of the “shumidan” platform in the center of the main hall.

On the platform, the “zushi” Buddhist altar, where the temple’s principal deity is enshrined, and Buddhist statues are displayed.

Each column has paintings of four saints drawn in two tiers in an area of about 180 centimeters in length from the upper surface of the platform and roughly 70 cm wide. Each saint measures about 70 cm tall, and crowds were painted in the background with an arabesque design adorning the upper part of the columns.

All the saints in the paintings are slender and depicted in a top-heavy posture. They have small eyes, a vertical bridge of the nose and a thick chin. The saints were reportedly painted in vivid colors.

Yoshitaka Ariga, a visiting professor of painting history at the Tokyo University of the Arts who heads a committee set up by Horyuji temple to preserve and utilize the temple’s murals, expressed doubts over the belief that the depictions date to the Asuka Period.

Saimyoji temple is known as one of the three major ancient temples in the Koto area, which is located around the north-central part of the current Higashi-Omi, Shiga Prefecture. The temple’s main hall was thought to have been built at the beginning of the 13th century and was renovated to its current state during the mid-14th century.

Part of the paintings of the saints on the columns are visible, but no research on the drawings had been conducted for a long time since there are too many Buddhist statues on the shumidan platform to have space for placing equipment for taking photos of them.

The research was conducted in June 2019 as some of the statues on the platform were moved out to be exhibited at “Timeless Conversations 2020: Voices from Japanese Art of the Past and Present,” which is currently being held at the National Art Center, Tokyo, and organized by The Asahi Shimbun and other organizations.

(This article was written by Jiro Tsutsui and Yoshito Watari.)