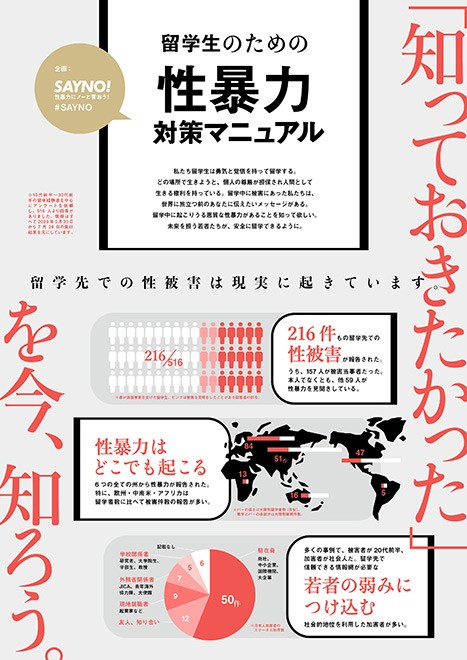 Guidelines on how to handle sexual assaults created for Japanese students studying abroad by victims and other university students. (Azusa Mishima)

While many female university students go abroad for what they will hope will be an enriching experience, some fall victim to sexual assault in a manner they never anticipated.

The perpetrator, in many cases, is a Japanese businessman stationed in the destination where the victim is studying.

The disturbing trend is identified in a survey carried out by a group of victims and university students.

Based on its findings, they have published guidelines for people who study abroad that they hope will provide a wake-up call for university administrations and major Japanese companies to stop abuse.

ATTACKER PRETENDED TO BE FRIEND

The leader of the effort, a 22-year-old senior student at a national university in Tokyo, spent a year in a European country as a student until July.

A Japanese man who worked for a major Japanese company raped her about four months into her study abroad life.

He was the first Japanese person she became acquainted with when she arrived in the country and still had worries about her life there.

He told her about where to go for grocery shopping. When she was in trouble, he gave her advice. She saw the man as someone reliable.

He didn't tell her that his wife and children were visiting Japan, the student said.

While she was at his home, the man sexually assaulted her.

The new year came, and the student attended a New Year’s party at the Japanese Embassy.

During the party, other Japanese businessmen stationed in the country groped her and told her things like, “I want to meet you alone” and “I divorced recently. Why don’t you be my girlfriend?”

Their crass attitude caught her completely off guard.

“I was really confused after the first incident, but I realized something was wrong at the party,” she recalled.

She then contacted a lawyer in Japan about the man who attacked her. The perpetrator later agreed to pay her compensation for her pain and suffering from the assault.

“After going through those procedures, I finally felt myself starting to get angry toward the perpetrator. Then I was able to think that I was not the one to be blamed,” she said.

But she still kicked herself, thinking, “Had I known such incidents had occurred before I went abroad, I could have avoided the (situation). Or, I might have realized sooner that I shouldn't blame myself.”

It then occurred to her that she “might not be alone.”

She suspected there could be a pattern where “older Japanese who know the local situation well” prey on “young students in a foreign country who don't know anything and feel anxious.”

With the help of fellow university students, she conducted an online survey of people who have studied abroad before.

The survey was carried out between May and July, with 516 people responding with personal stories.

About 80 percent of the respondents were female.

A total of 157 people, mostly female, said they experienced sexual harassment and assaults while they studied abroad.

Many said the perpetrator was a Japanese expatriate, and that among them were individuals sent over by companies in Japan.

Students were often sexually harassed verbally at dinner parties or while drinking alcohol. Sometimes students were forcibly brought into the perpetrator’s home.

“The (perpetrator) was introduced to me as a ‘kind Japanese national’ so I could not disobey,” one victim said.

“The person was in a superior position and I could not fight,” another said.

A total of 58 respondents said they were not victims of sexual assault themselves but had witnessed and heard about such incidents.

The students who conducted the survey summarized the results and created “guidelines for students who study abroad on how to handle sexual assaults.”

The students said they will make details of past cases, including where incidents occurred, available online.

They also plan to approach companies that have foreign branches and that transfer employees abroad and urge them to take measures to prevent abusive acts by their staff.

Through their actions, the students hope that young people will get to “know the things that they may wish they knew” before going to a foreign country to study.

They also want to increase the awareness that “the victim is never to blame.”

The survey results also reveal the lack of proper guidance for students who prepare to study abroad. Most respondents said they never received any.

A 21-year-old senior student at a private university in Tokyo said she joined the team that conducted the survey because she doesn't want what happened to her occur to other students.

Two days before her return to Japan after completing a three-month internship in a developing country, a group of about 15 people planned to host a farewell party for her.

A Japanese man who worked for a Japanese company told her to arrive at a certain time, which turned out to be one hour earlier than what others were told.

There, the expat raped her. She was 19 years old.

She said she had scarce information on what she could do to address the assault back then, let alone on what was actually going on in terms of sexual assaults against students abroad.

“Some incidents could have been prevented if students, including myself, were warned of typical cases,” she said.

“I don’t want students who are going to study abroad in the future to experience the same thing,” she said, and urged university administrations to create more opportunities to call students’ attention to the issue.